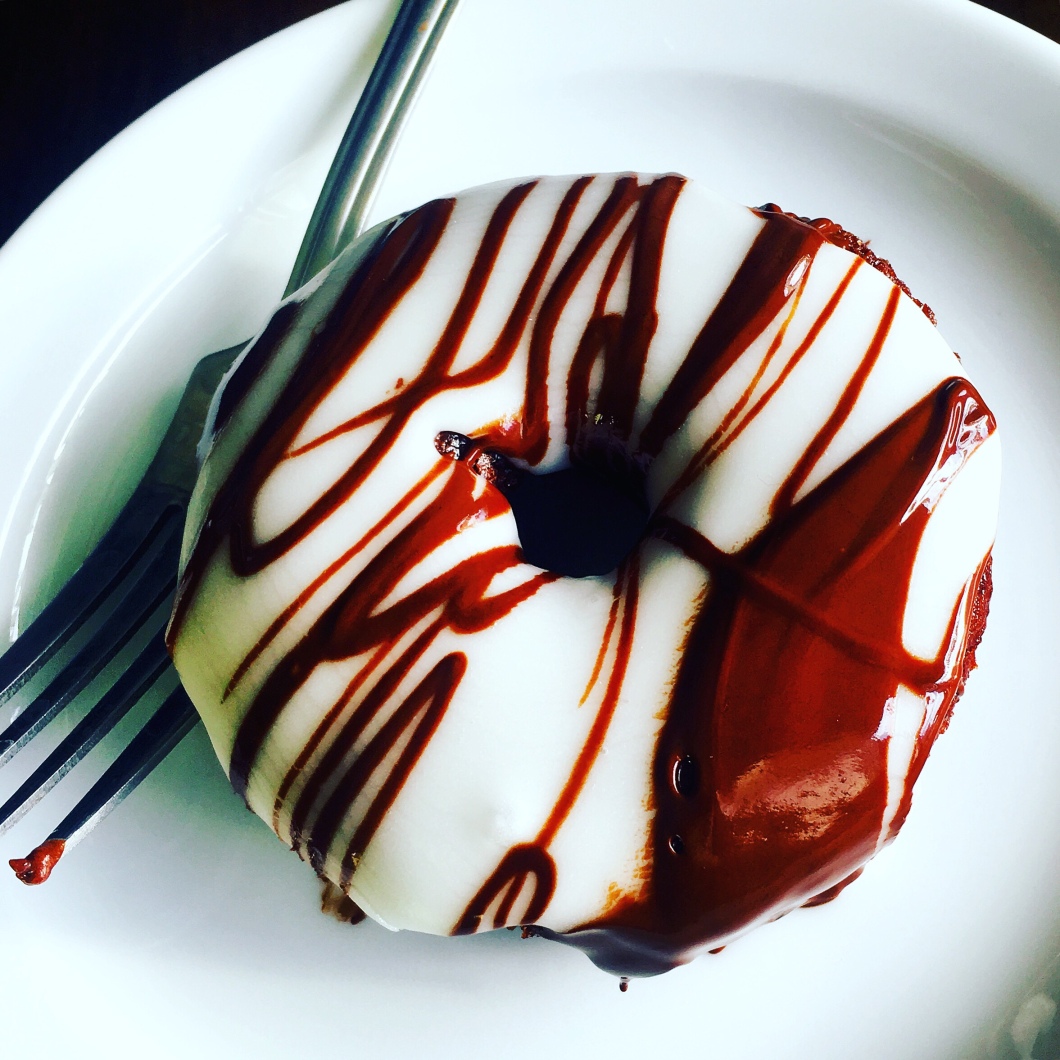 So for reasons I touched on in my previous post, I decided against committing to Veganuary this year. I will be trying to fit in a Vegan month at some point later in the year, and will also be continuing to cook lots of plant-based meals both in January and throughout the rest of the year. I’ve put this post together to give you a bit of inspiration from some of the plant-based meals I’ve made and some tips on things that you actually can eat when a lot of vegan food seems to be very Coeliac unfriendly. I’m sure you will have already noticed the barley extract and the wheatflour and the breading on every other product. And don’t get me started on seitan. Just a casual, satanic lump of gut destroying gluten that is waiting to get you.

With all that in mind here are some things that you can eat! 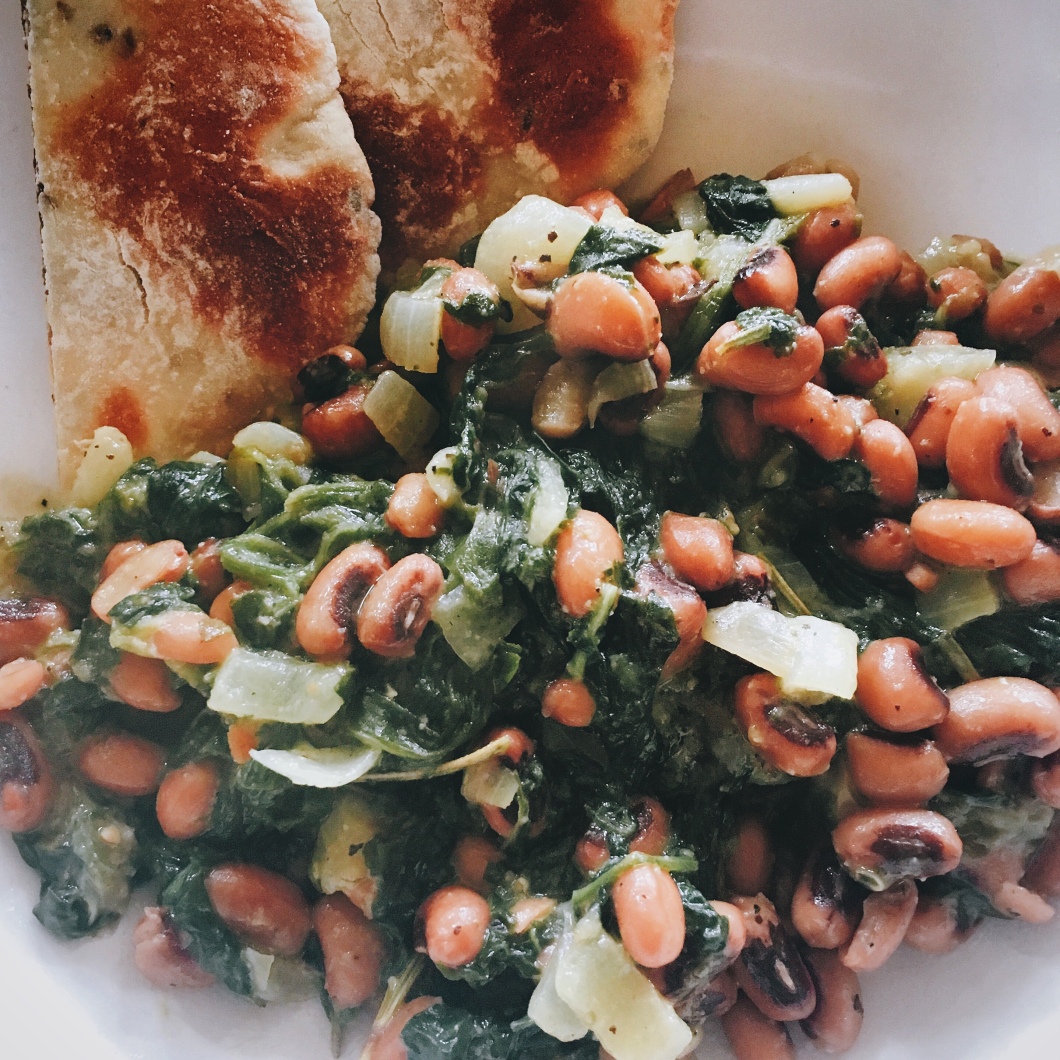 OK, lets get this out of the way from the start, pulses and green vegetables are your friends, so embrace them. And add garlic because all kinds of beans love being cooked with garlic, they are bland and need something to give them a kick… The flatbreads that you will see popping up through a few pictures on this post are really simple to make, essentially just mix up non dairy yoghurt with GF flour so that it makes a workable dough and then roll into balls and flatten on a baking sheet, once they start to colour up a bit just flip them over, if you want to vary the mix a bit thrown a few nigella or sesame seeds. I should really write an actual recipe down for these! 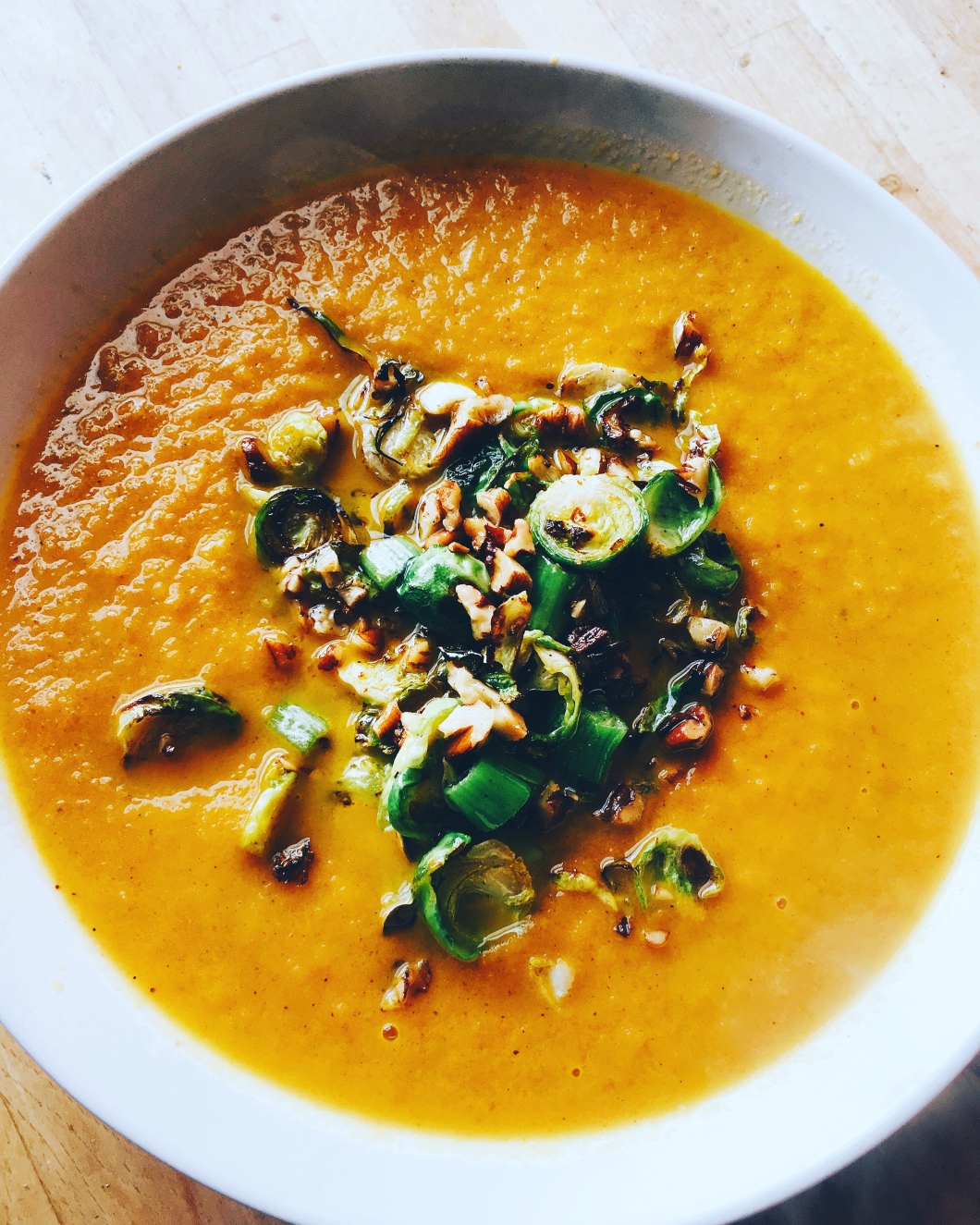 Soups are your friend too, especially at this time of year when it is freezing and you want to eat something comforting. Invest in a decent veg bouillon at add some flavour, Marigold does one which is both GF and vegan, and it has become a store cupboard staple for me. Carrots and other root veg love spices, so experiment with which combinations and mixtures you like, and if you’re unsure where to start pick up some decent garam masala, which will give a nice warming boost to your soup! This soup uses up some sprouts which were hanging around in the fridge after the festivities, fried up with some spring onion, and some chopped pecans thrown in at the last minute for a bit more texture and a bit of protein. 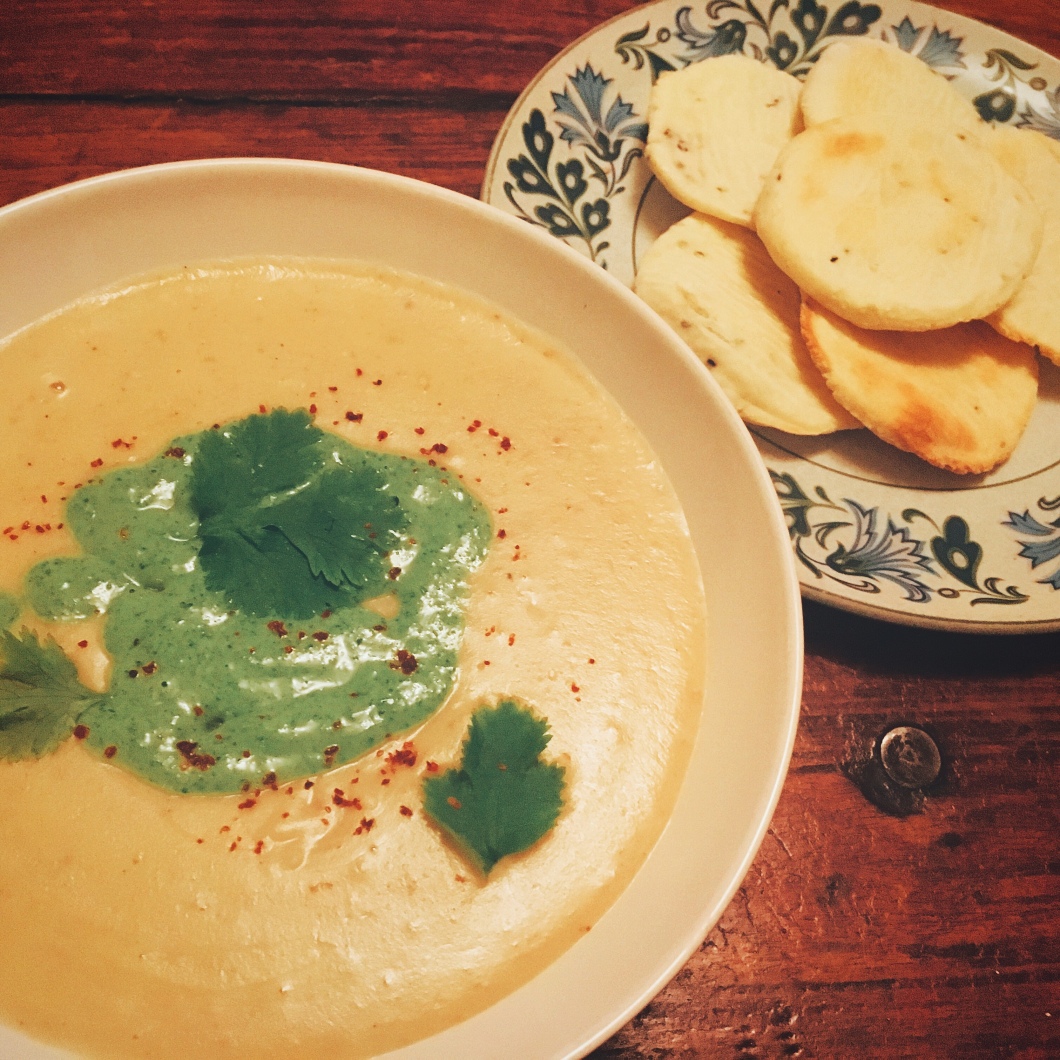 Excuse the slightly rubbish picture, I should make more effort really but my hunger tends to get the better of me before I can get the lighting set up right! Here the homemade flatbreads make a reappearance alongside a spicy parsnip soup. The green sauce is some fresh coriander and mint blended with non-dairy yoghurt. Neither of these soups have been made with a milk replacement, I tend to find that it is filling and creamy enough without it. Just fry your veg with some onions and add the bouillon power and spices, then add water and cook until the veg are soft enough to blend, hardly rocket science. 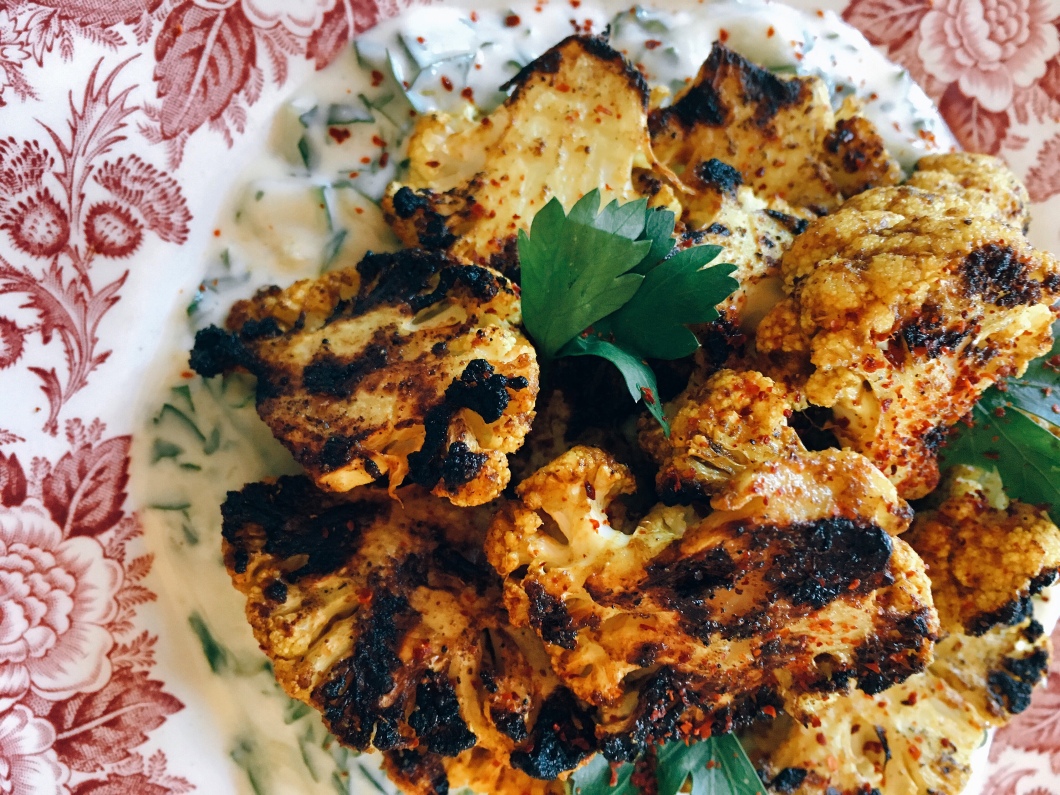 Many vegetables love spice, cauliflowers are no exception! Marinate them in a blend of spices with a little oil and then cooked on a grill pan until they start to char and finished off in the oven for a few minutes to fully cooked through. I served these on a tzatziki made with soy yoghurt, look for a natural one as some of them can be quite sweetened, which is fine for chia pudding etc, but a bit odd in savoury dishes. 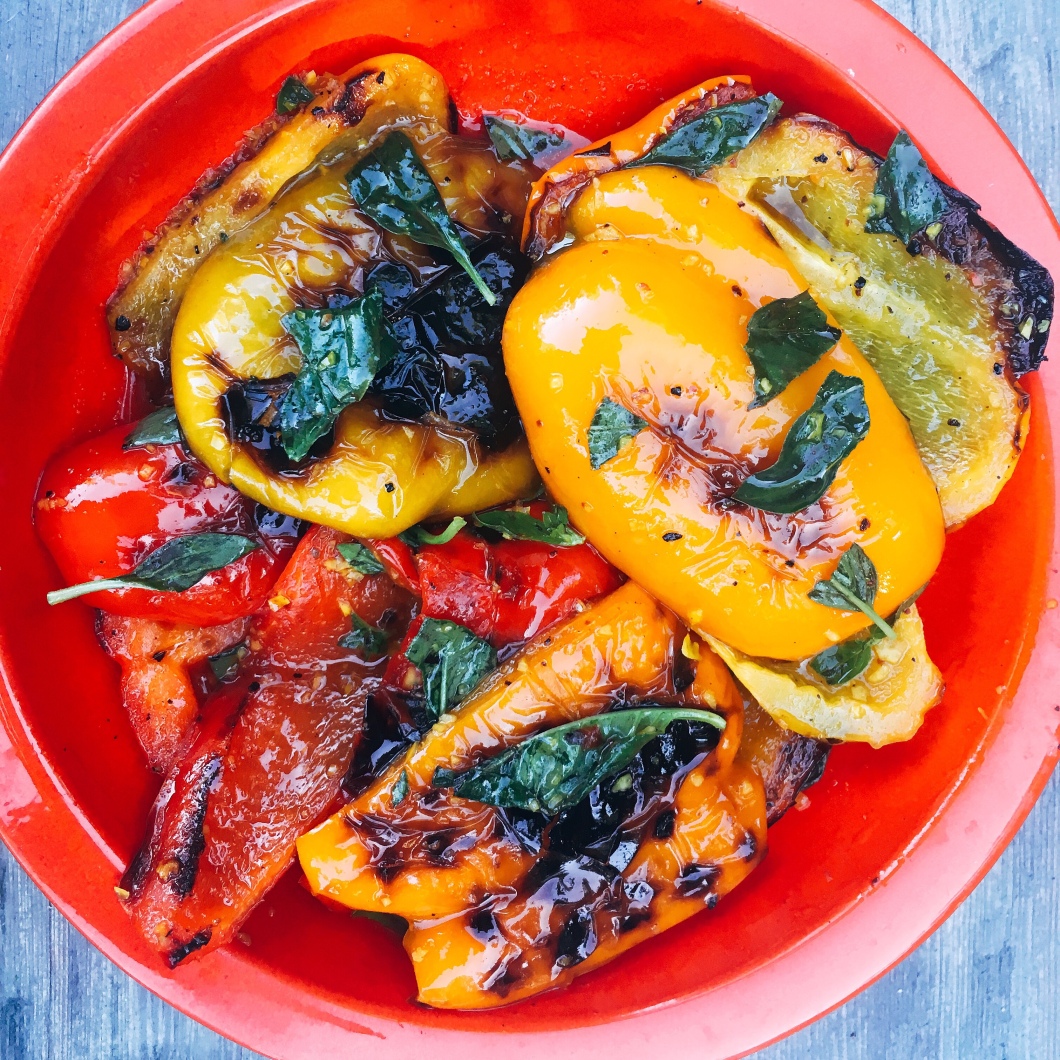 Peppers also love a bit of a char, though these were cooked on a barbecue, roasting on a high temperature or using a grill pan will give a similar effect. Tapas style eating is also a great way of keeping being meat free interesting. 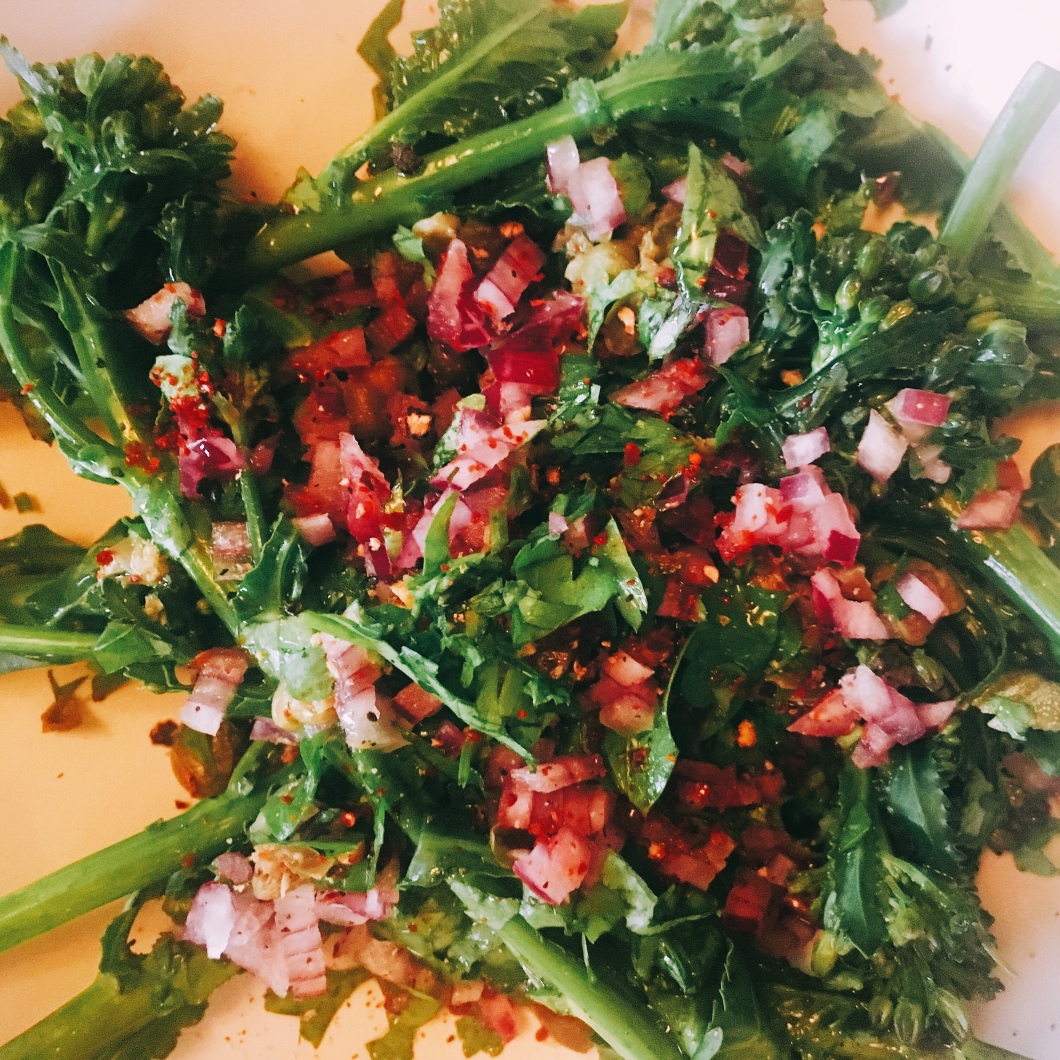 The addition of things like capers (they’re not just an accompaniment for fish!) can give a nice depth of flavour in vegetarian dishes like this broccoli, another dish that is great for sharing! 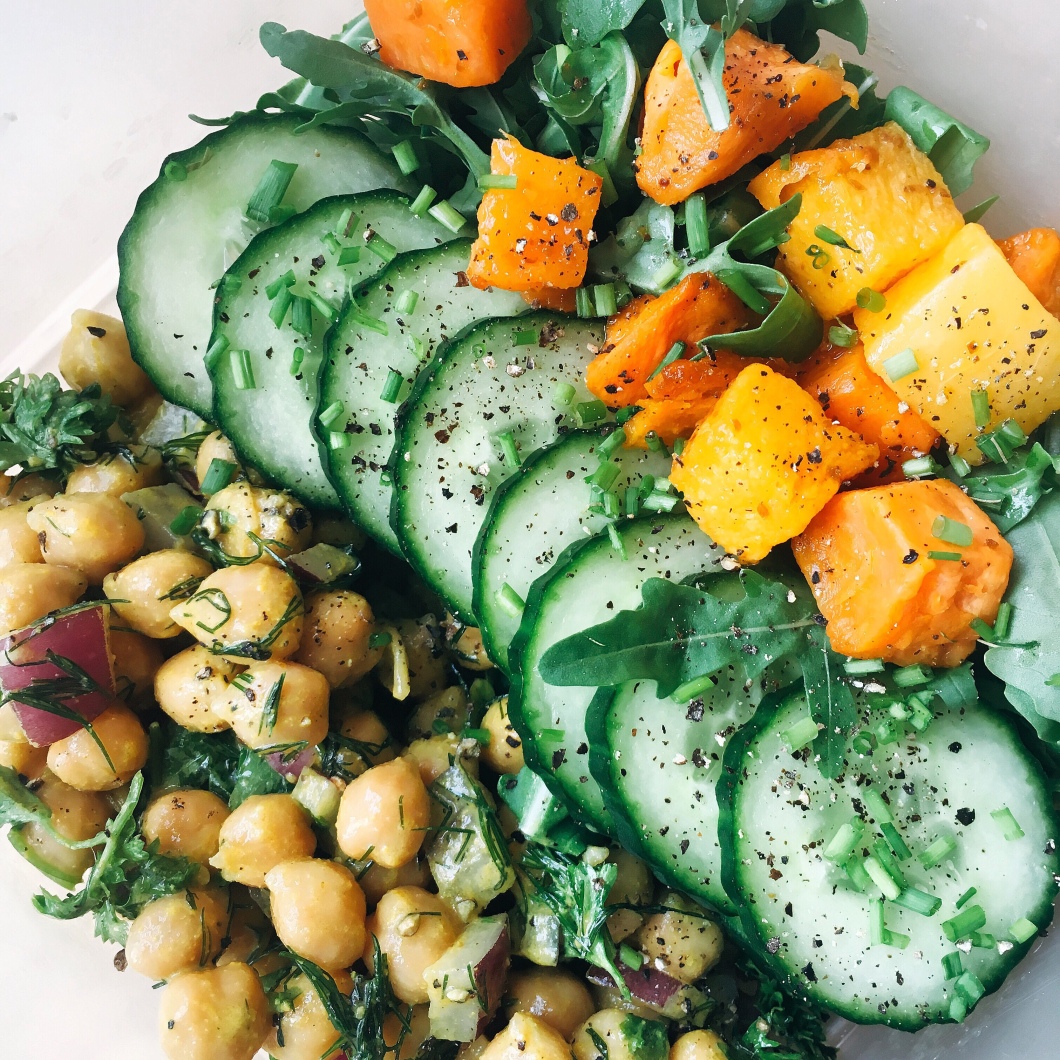 Meal prep for your working day is a great way of both keeping on track and using up leftovers! The chickpea salad here is a twist on this recipe with the choice pulse switched out. Here I included some roasted squash but leftovers of the cauliflower, peppers or broccoli would all make for a tasty and different desk lunch, because there are only so many veggie soups from Pret you can manage before you get a little bit crazy! 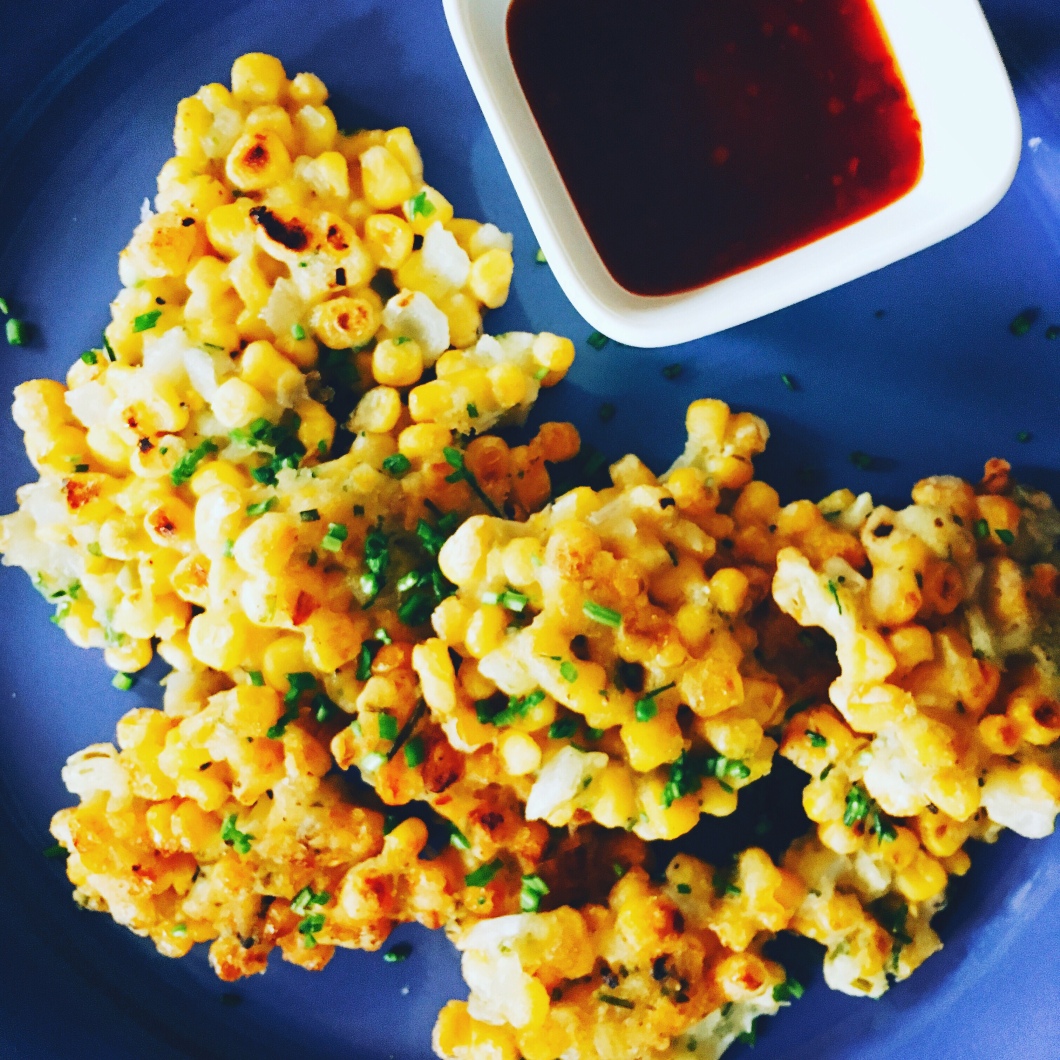 Fritters are your friend too! Many vegan dishes are by nature super healthy, especially when you can’t eat gluten and miss out on a lot of the junk food options. These fritters  take a matter of minutes to make from mostly store cupboard ingredients and mean you can get your fried food fix! Another recipe that maybe requires a little more forethought is this Meatfree Mondays: Korean style mushroom pancakes from my archive, although you can substitute the veg and have a play around with things that work! 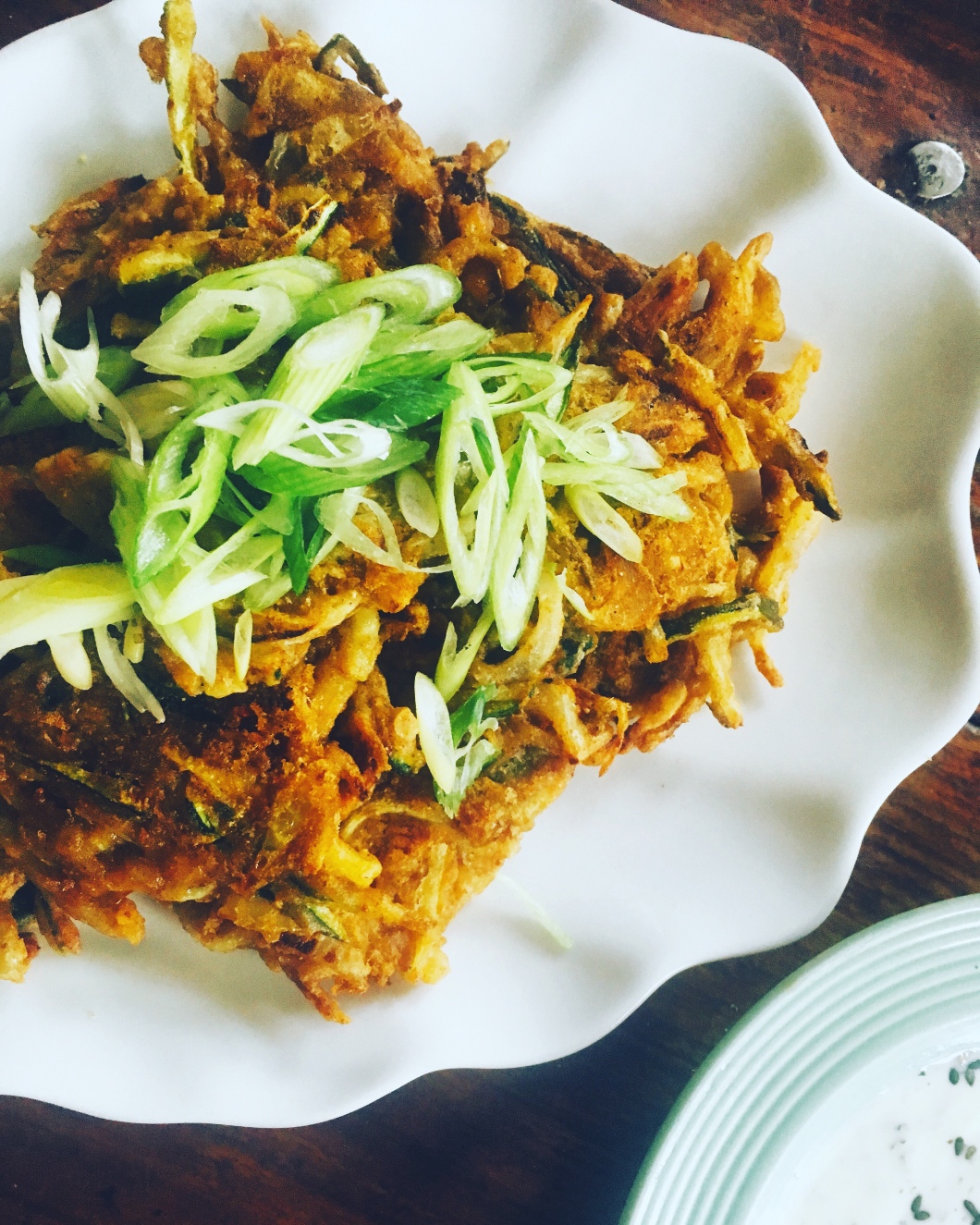 These onion and courgette bhajis are a continuation of the fritter theme, and the dip I served with them is a mix non-dairy yoghurt, tahini, dried mint and garlic powder… Tahini is also your friend, the sesame paste is more than just a component of humous! 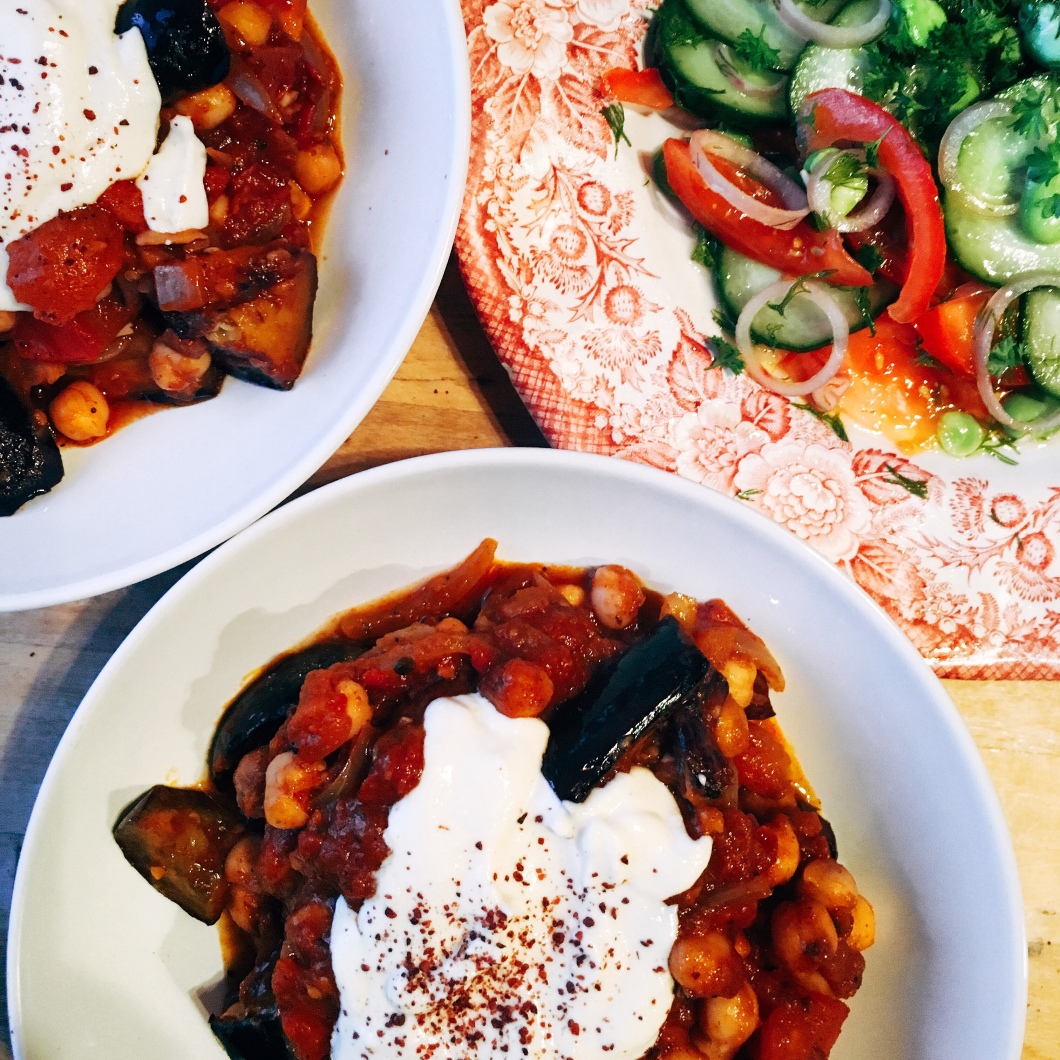 This is a play on a Lebanese moussaka, lighter than it’s Greek cousin and meat free (you can always sub the lamb for puy lentils though if you get the wants for a regular moussaka). It is silky stewed aubergine and chickpeas in a rich, spiced tomato sauce, and the topping I used here is a mix of natural soy yoghurt and tahini. Serve it up with a fresh, herby salad, add flatbreads if you want, but to be honest it is really filling without! 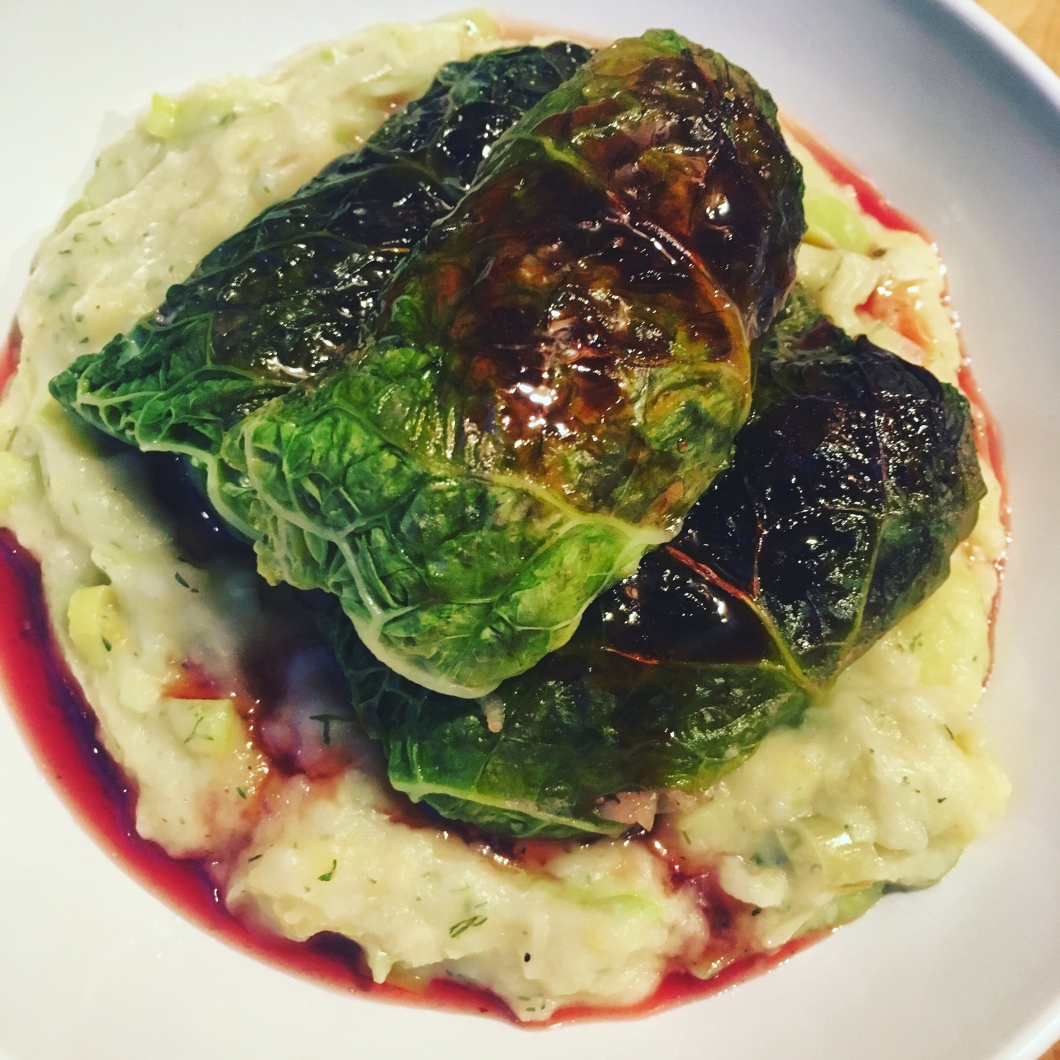 As I just mentioned puy lentils make a good meat substitute where you would normally use minced meat, since most vegan mince is not gluten free (if you find a good one that is, please do let me know!). This is a good, filling winter plate of kaalikaaryleet – Finnish cabbage rolls. The creamy mash with added leeks and herbs was made using soy cream, and is no less unctuous for the exclusion of dairy, served with a berry and cider sauce over the top. 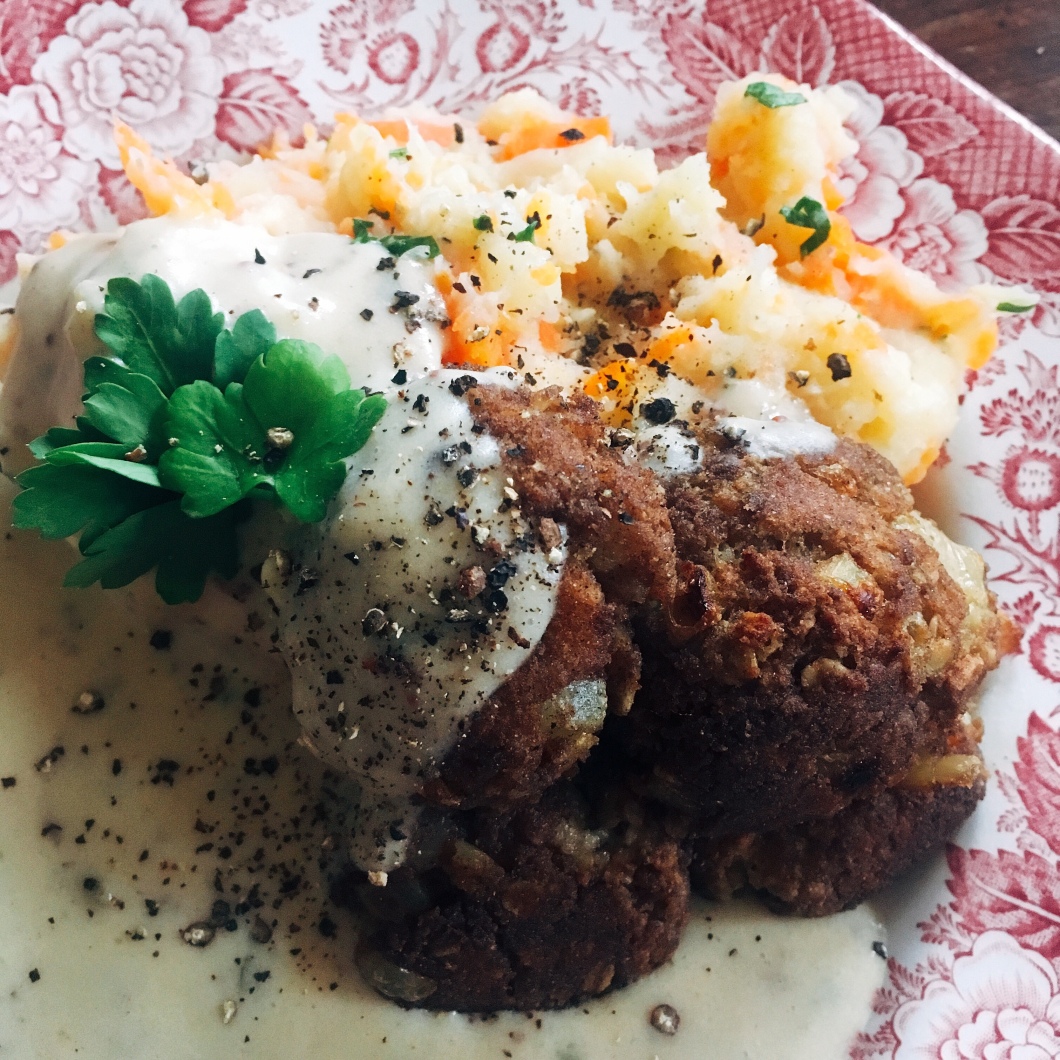 Another Nordic inspired dish is this plate of meatless balls made from leftover GF porridge! I will include a recipe for these on BekiBites soon, as they have become a meat-free mainstay. The creamy mustard sauce is also totally plant based and easy to make, just make sure that your mustard is gluten free, and that they haven’t sneaked in some wheatflour to “improve the texture”. 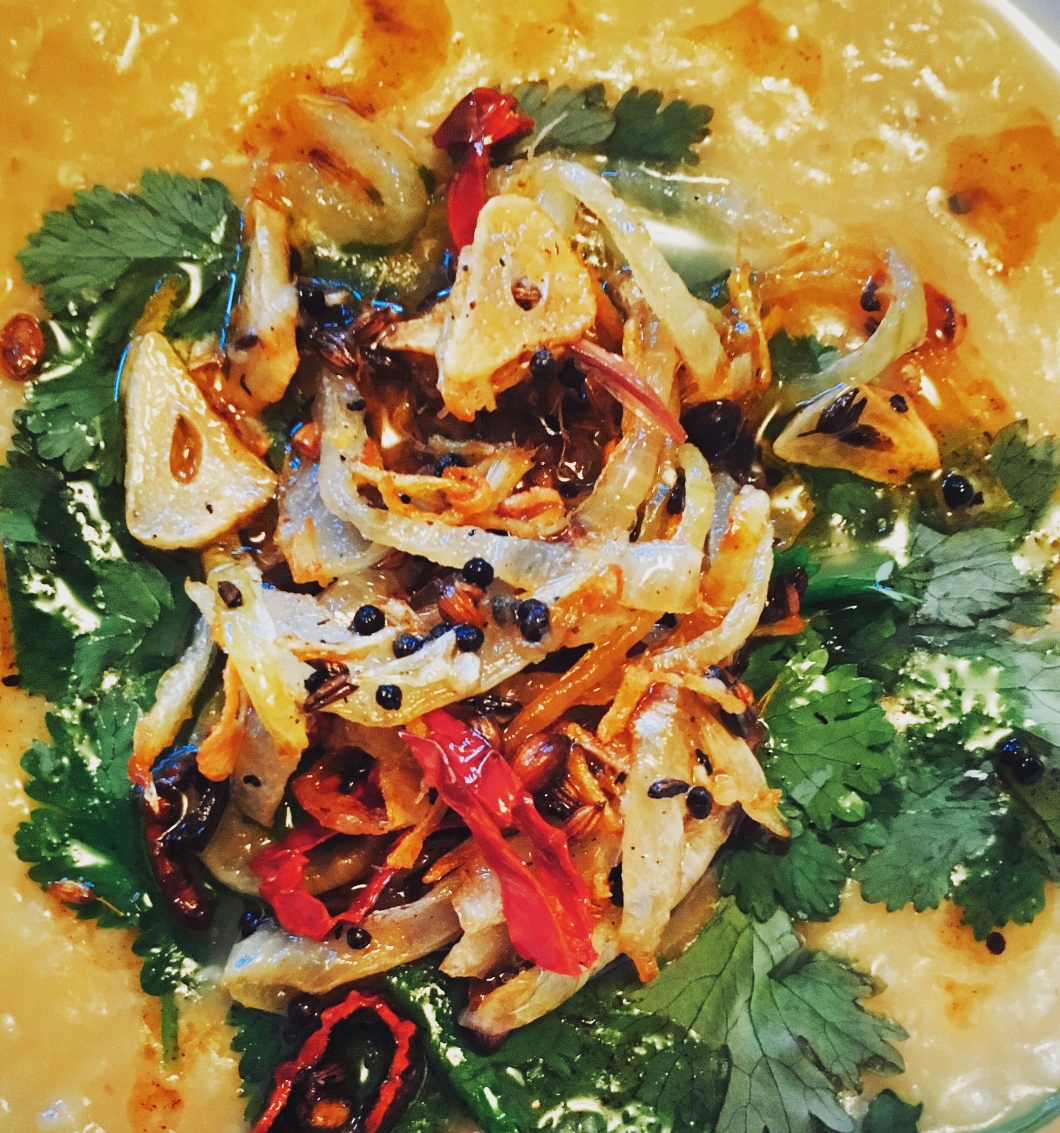 One of The Pet Finn’s favourite winter meals is tarka dhal, more lentils of a different kind, and very easy to veganise – just switch from butter to an oil or dairy free substitute when you are frying the spicy tarka, and serve with more of the ubiquitous flatbreads or some readymade ones! 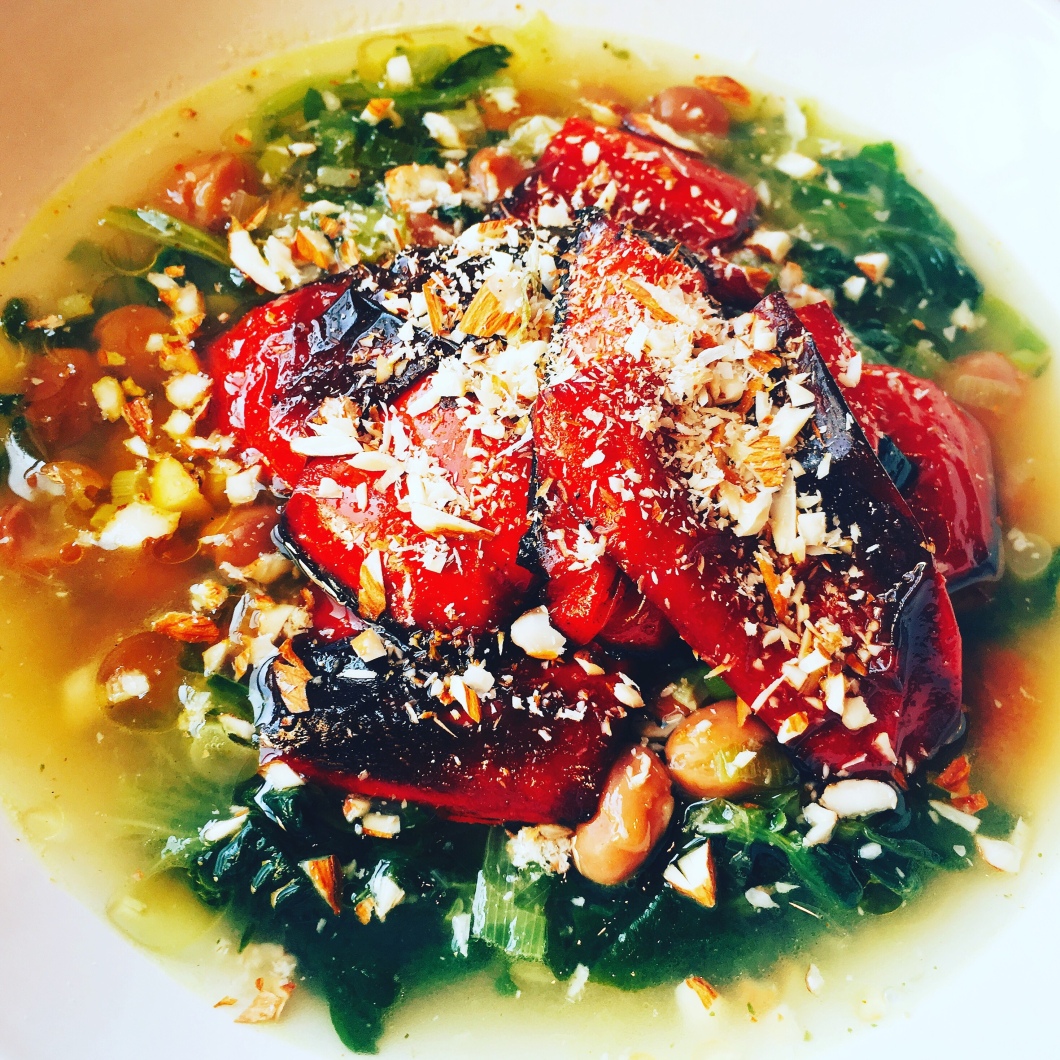 More charred peppers, with a spinach and bean broth and some chopped almonds on top. Thinking about texture and balance in your meals will help sop you from getting bored of being meat free… and lots of colour too! 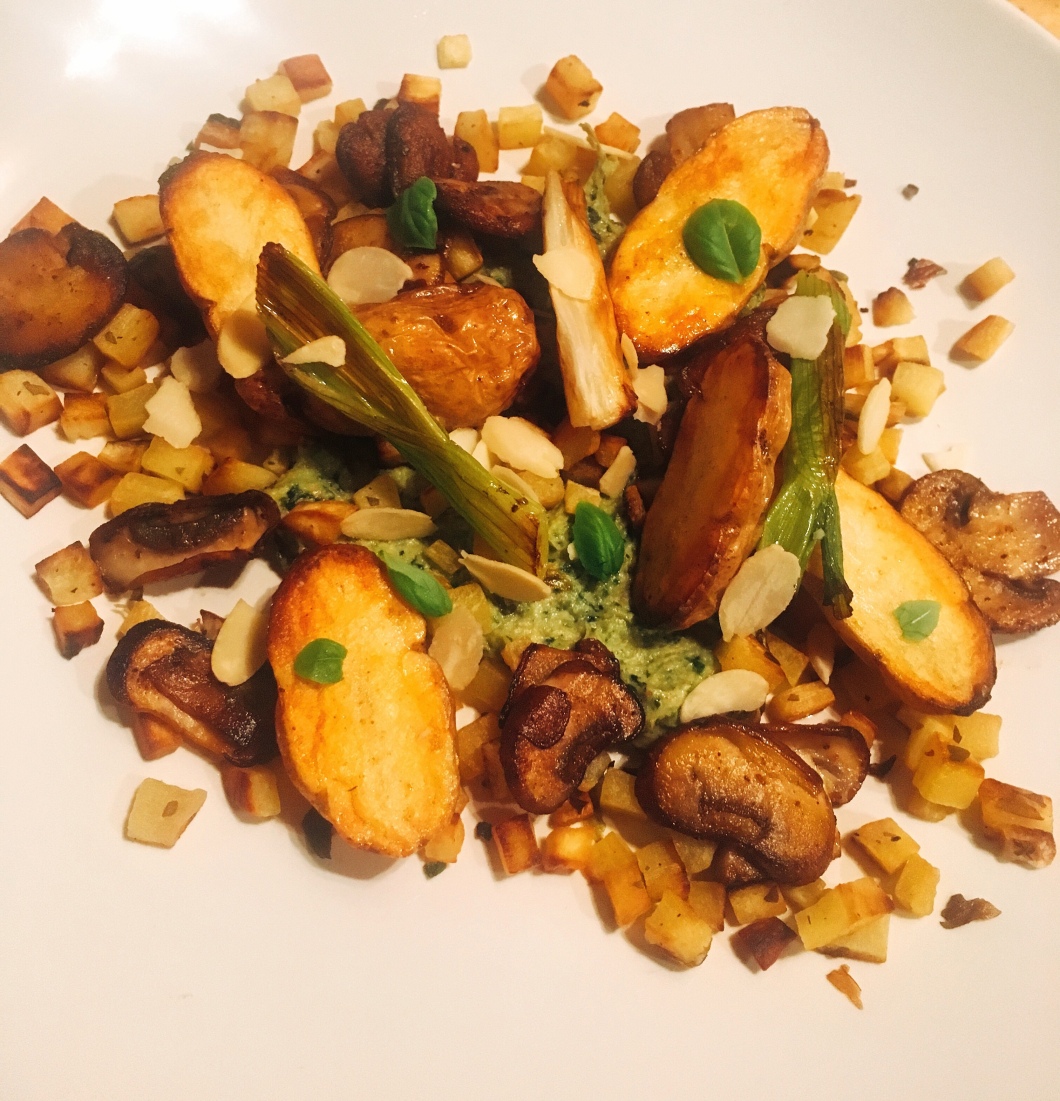 Why not try elevating an unusual, normally mundane ingredient to being the star of the show, like the perfectly roasted pink fir apple potatoes I used here. I made an artichoke and basil cream (no dairy needed) which would also be great with pasta too. Mushrooms, especially fried until they are golden with a grate of nutmeg give a bit of added umami. 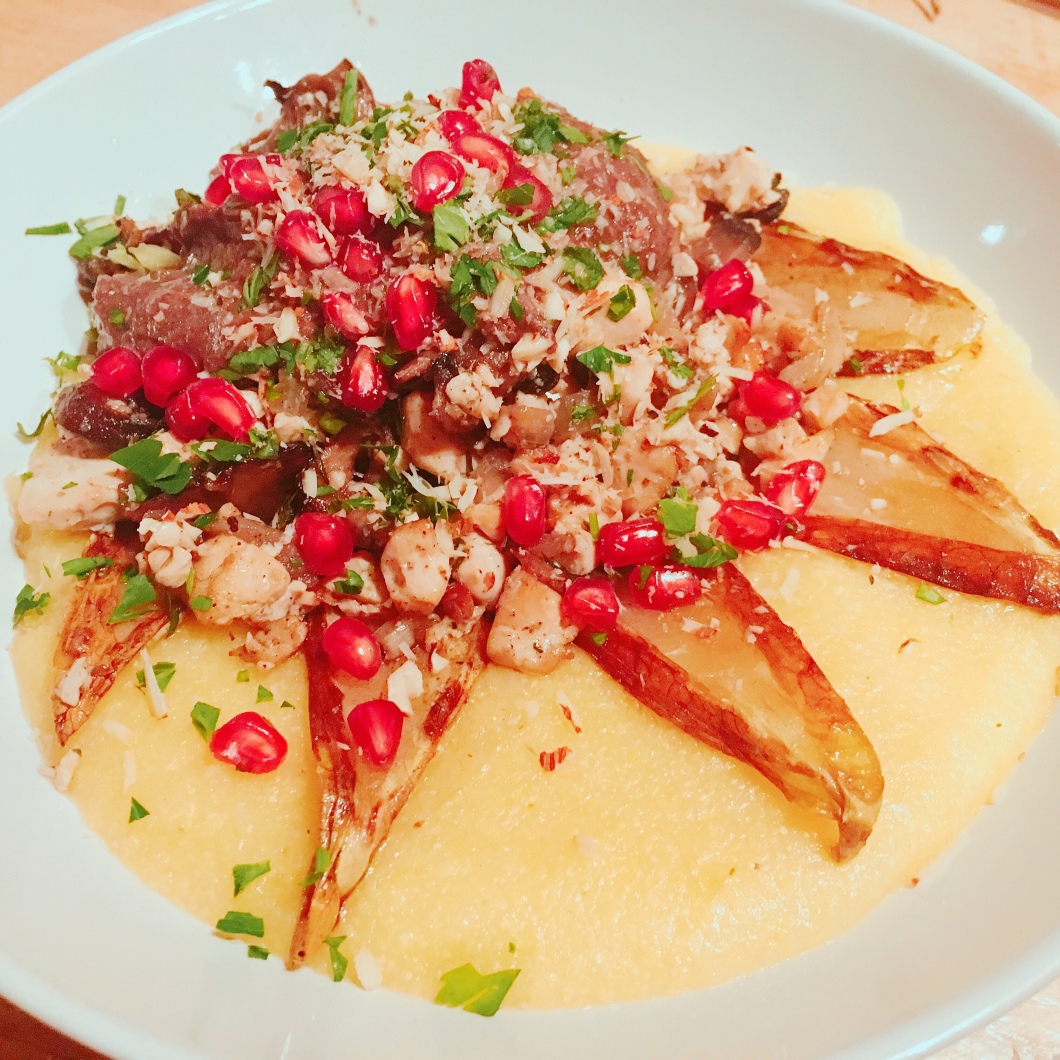 I think I got a bit over-excited when I made this one, but I had roasted some tofu and chestnut mushrooms, and also used some dried funnel chanterelles softened in some red wine (check to make sure yours is vegan friendly) and then blended to make another totally plant based, but unmistakably creamy sauce. Polenta is also easy to veganise, in fact I can’t remember the last time I made it with dairy. Instead of parmesan use nutritional yeast, aka nooch, aka that thing that you will be reaching for any time you want a cheesy flavour, and swap the butter for a good extra virgin olive oil. 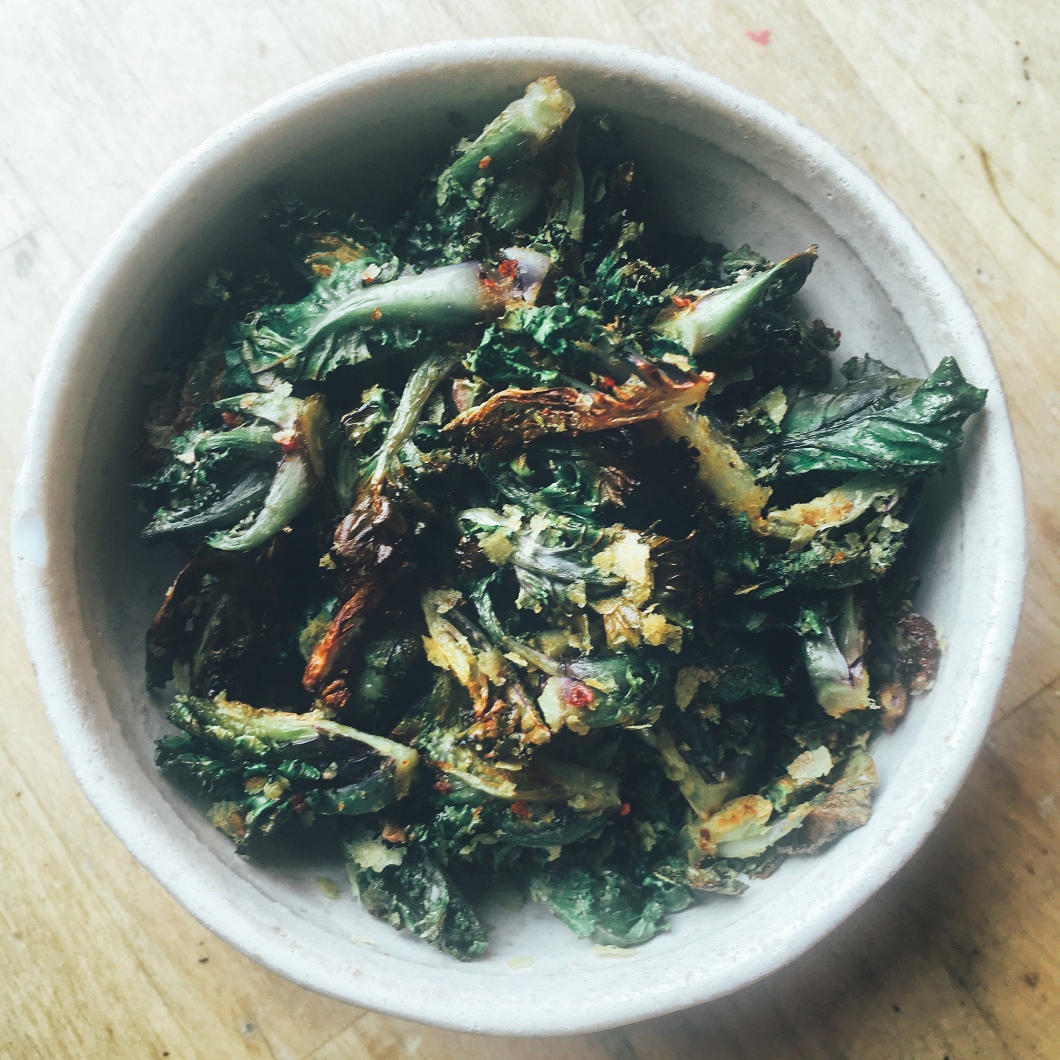 And some more nooch, sprinkled on these crispy roasted kalettes, as flower sprouts seem to now like to be known, along with a little powdered garlic and some Aleppo pepper flakes. Boom! Easy home made kale chips! 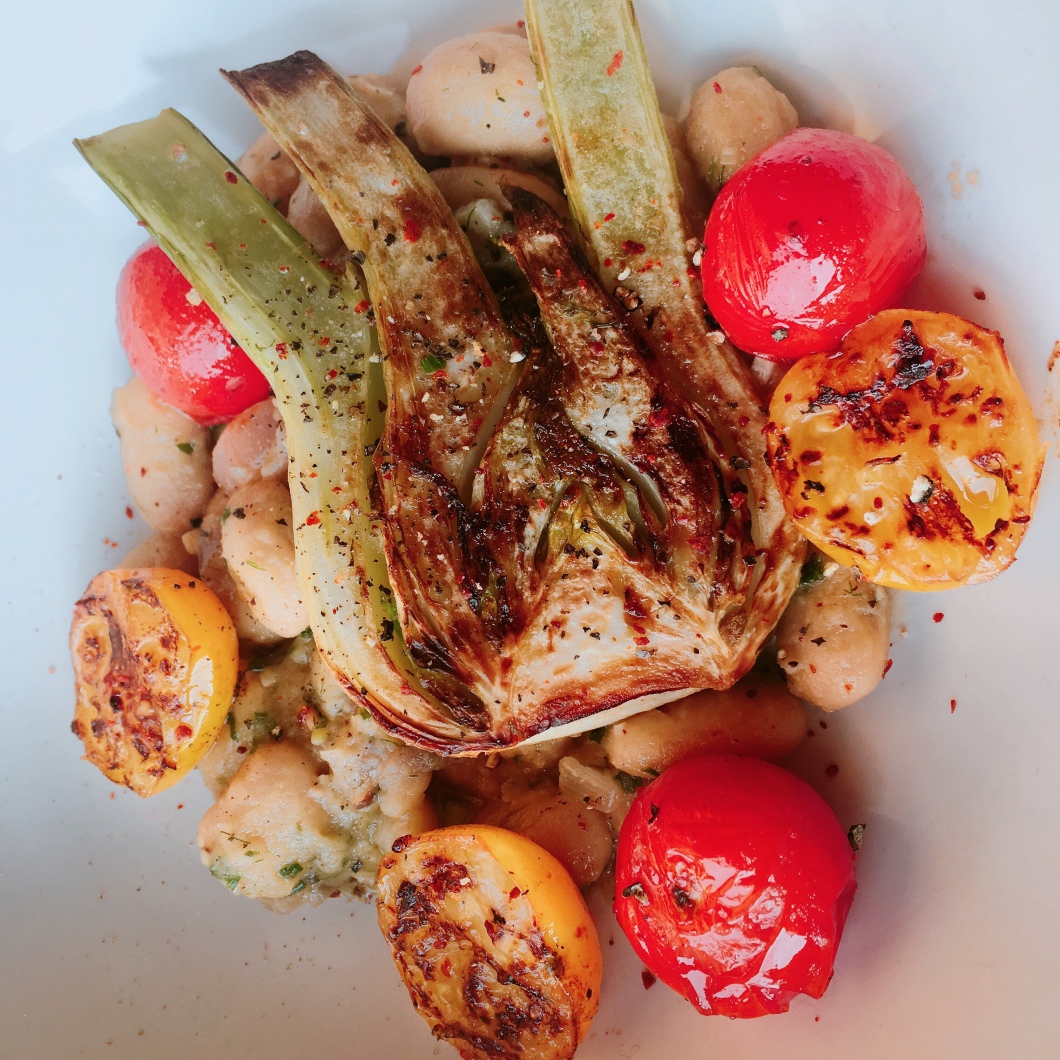 Here are some more garlicky beans this time topped off with charred fennel, another veg I think doesn’t get enough love, and just like the poor old capers seems resigned to being a fish garnish for all of eternity. As with the cauliflower once you have charred it on the grill pan, cook in the oven until tender. 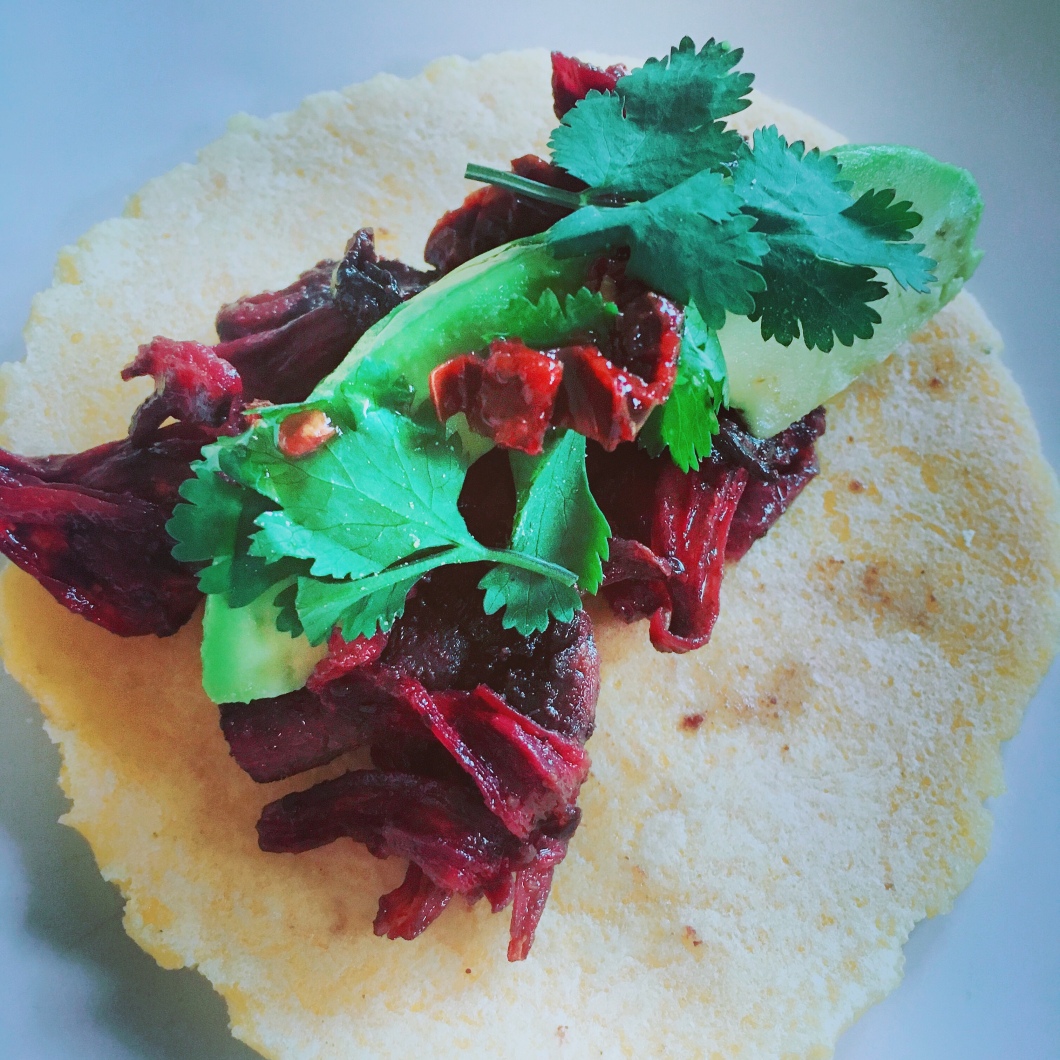 My desire to cut down on food waste sometimes has some delicious results… I love a hibiscus tea, and I had read that Mexicans use them as a taco filling, after cooking with a little spice obviously! I think I would chop them down a little more next time but otherwise they were really delicious! I think cooking more plant based meals has pushed me to be more creative not only with how I cook familiar ingredients but with trying out new ones too! 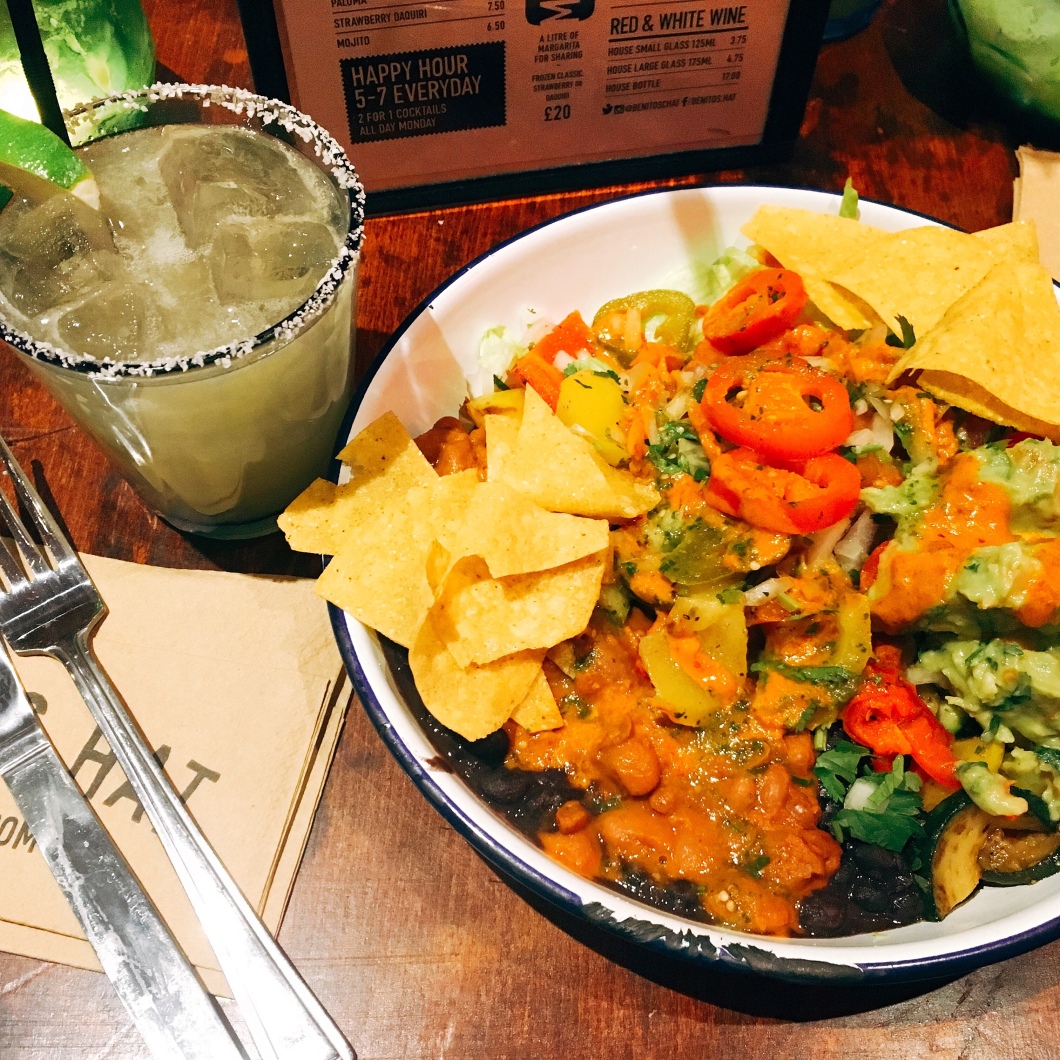 Not everything has to be home made though, and if I am looking for something quick and plant based on the go, Mexican is a great option, as the combination of beans which are high in lysine with corn or rice makes for “complete protein” plus many of the build your own… places tend to be well versed in helping coeliac customers. Also tequila is gluten free. 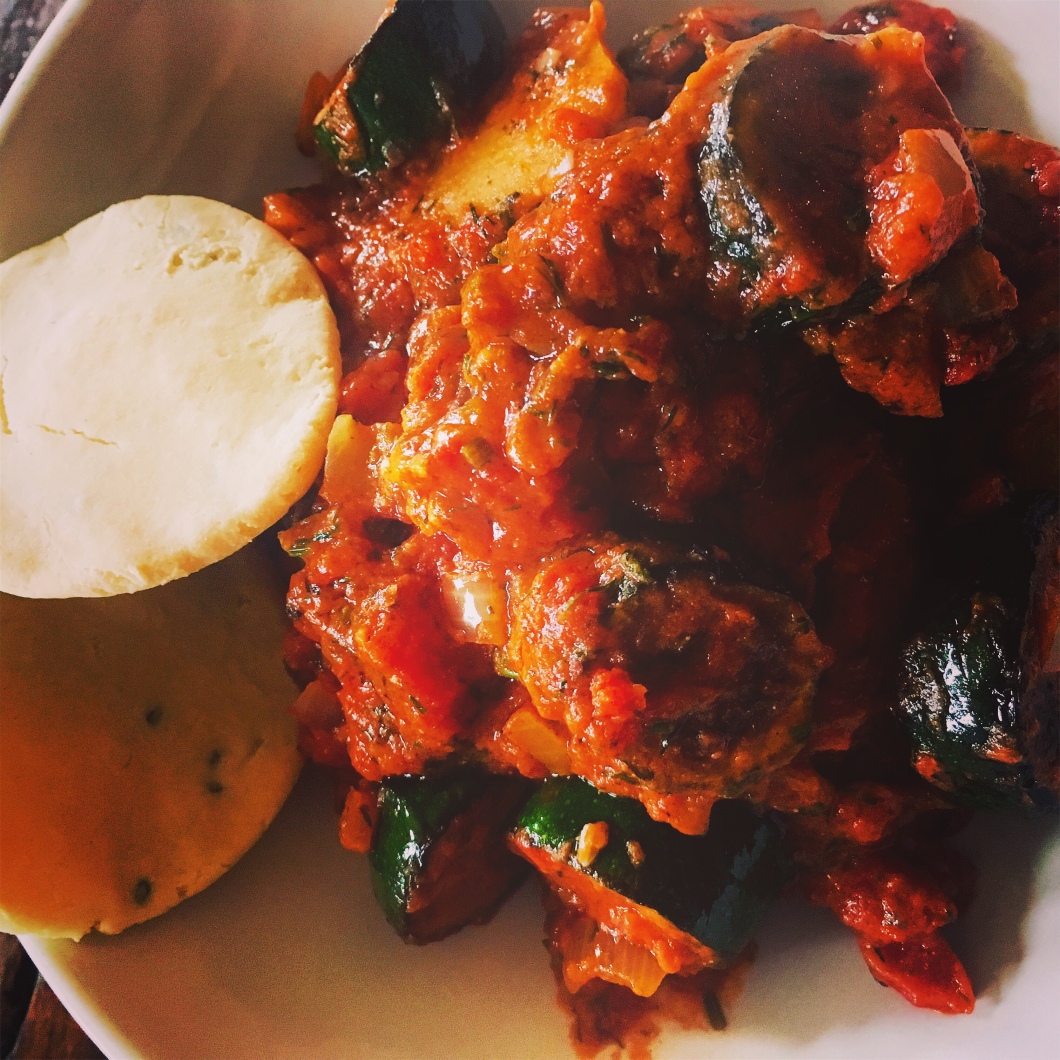 A good hearty vegetable stew is a filling meat free meal, and looking to the eastern mediterranean can give you lots of inspiration. 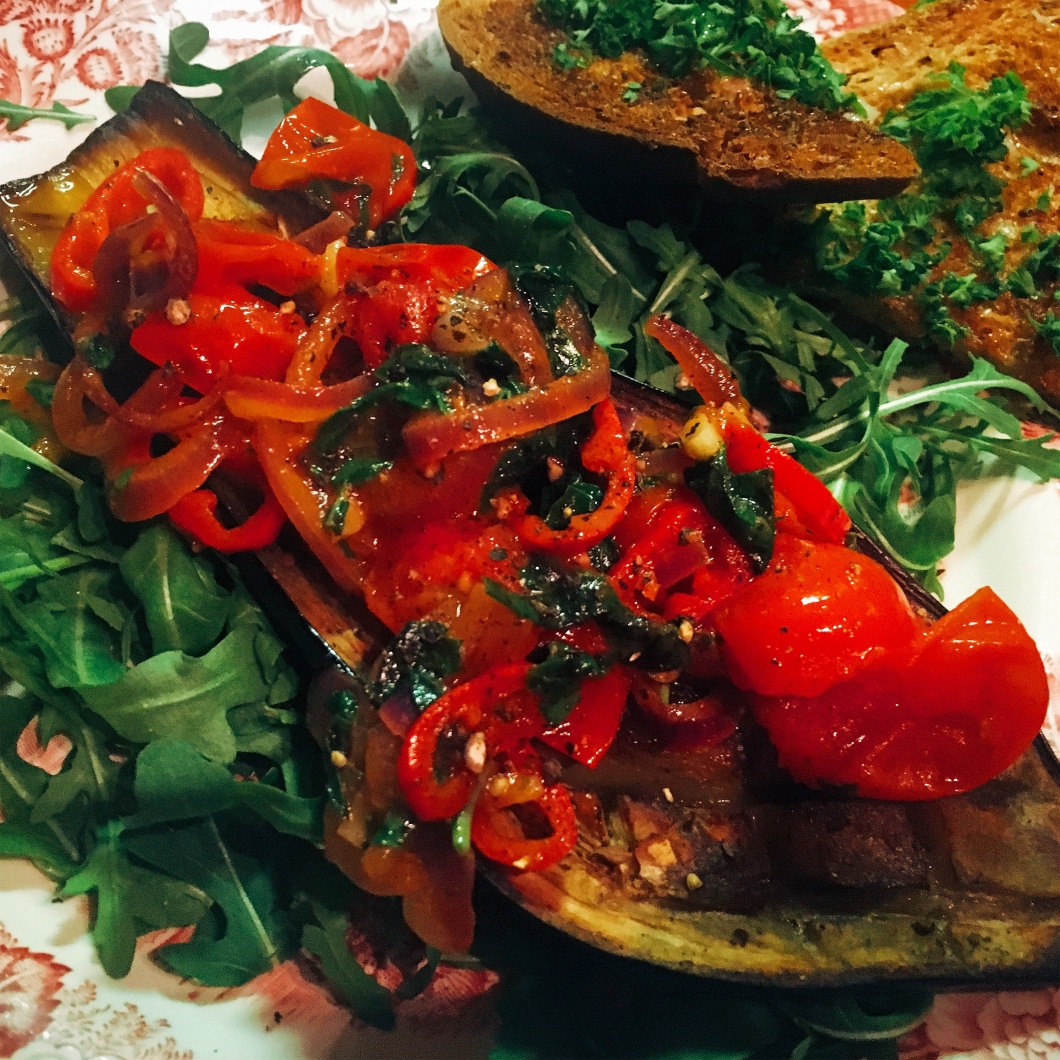 Cooked and topped aubergines are a great focal point of a meal, take inspiration from dishes like Imam Bayildi, or look to asian dishes like Japan’s Nasu Dengaku (miso aubergine). 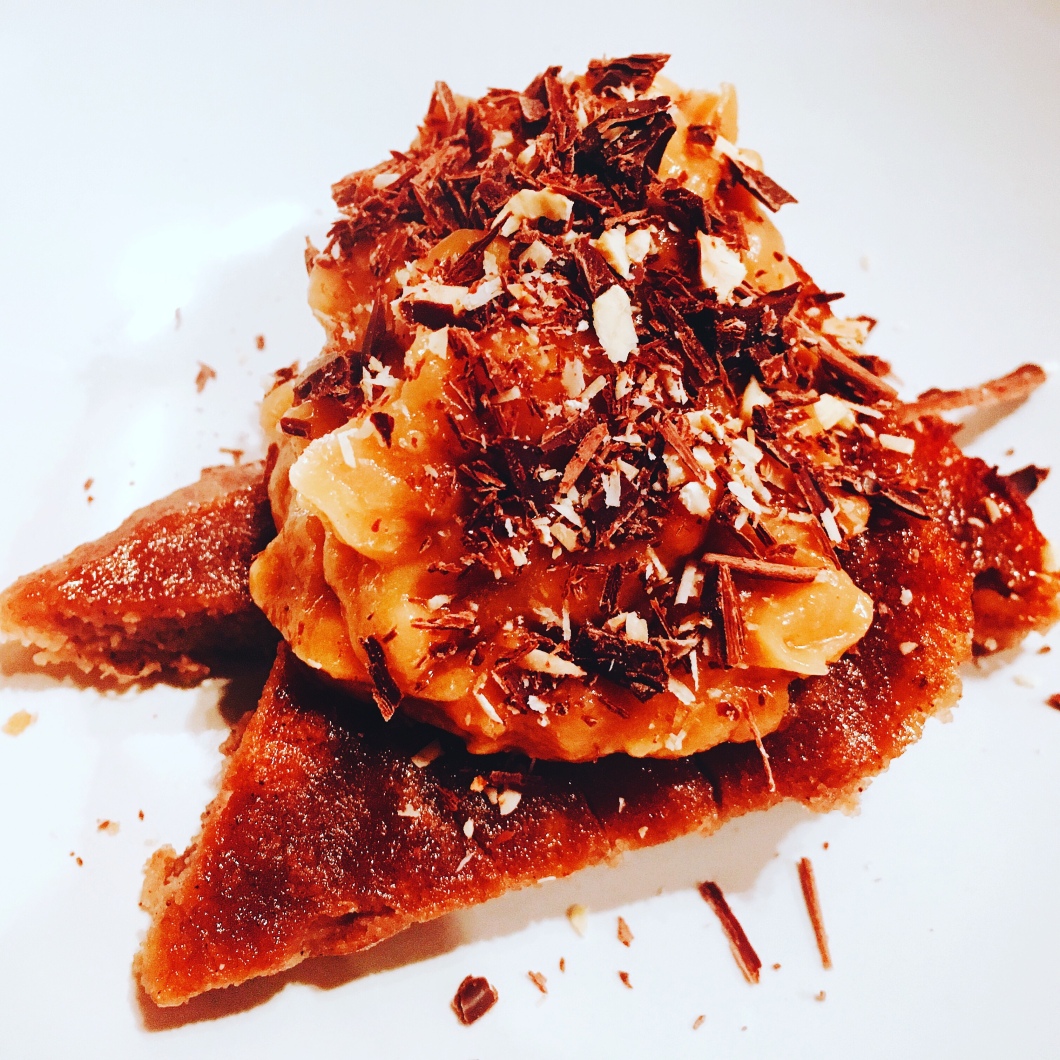 And don’t forget cake… I sometimes find that “healthy cake” – ones which are both gluten free and vegan have had most of the joy punched out of them, but there are some good ones out there, this was an experiment, which though it didn’t go to plan ended up being delicious anyway… 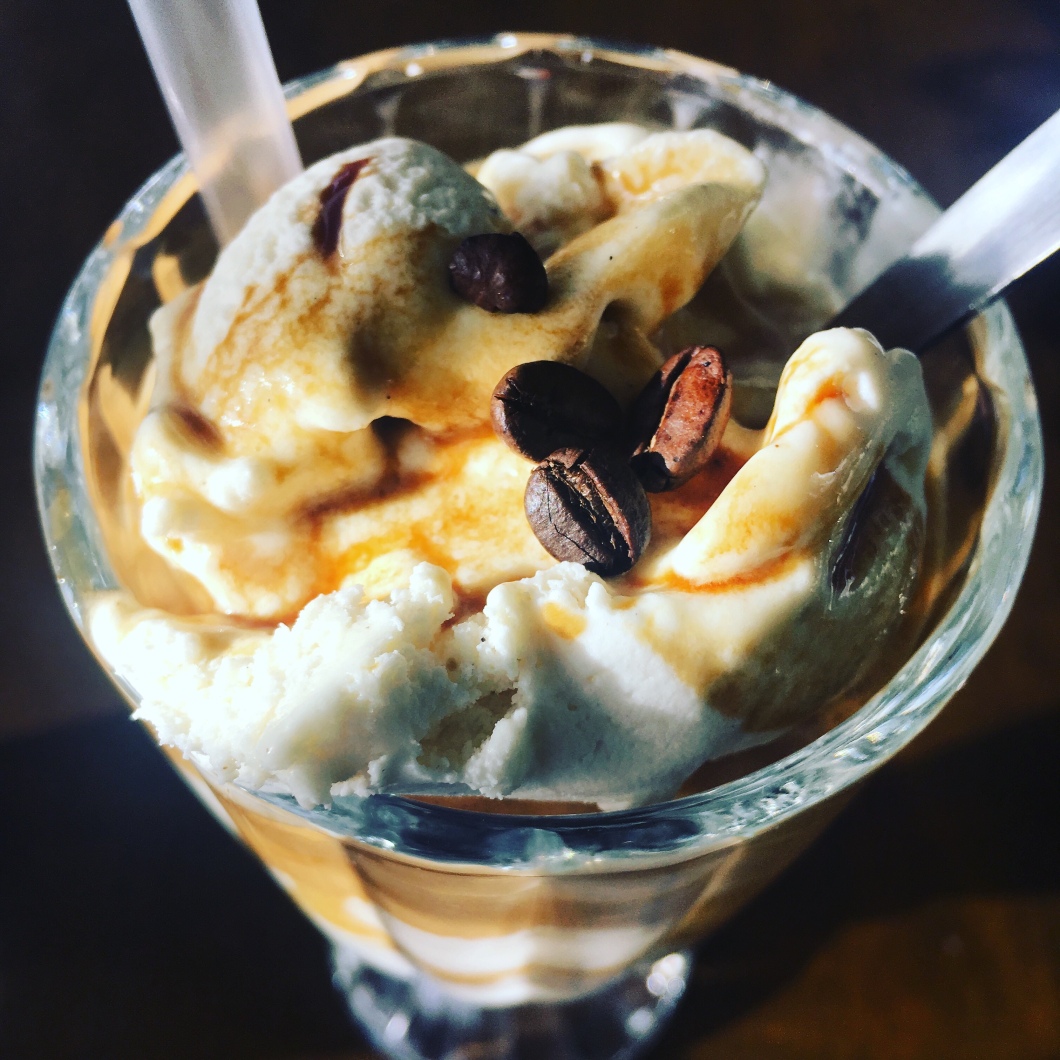 And there are places like Cookies and Scream, gluten free AND vegan, and somewhere I have enjoyed visiting so much it has made it onto BekiBites not once, but twice. 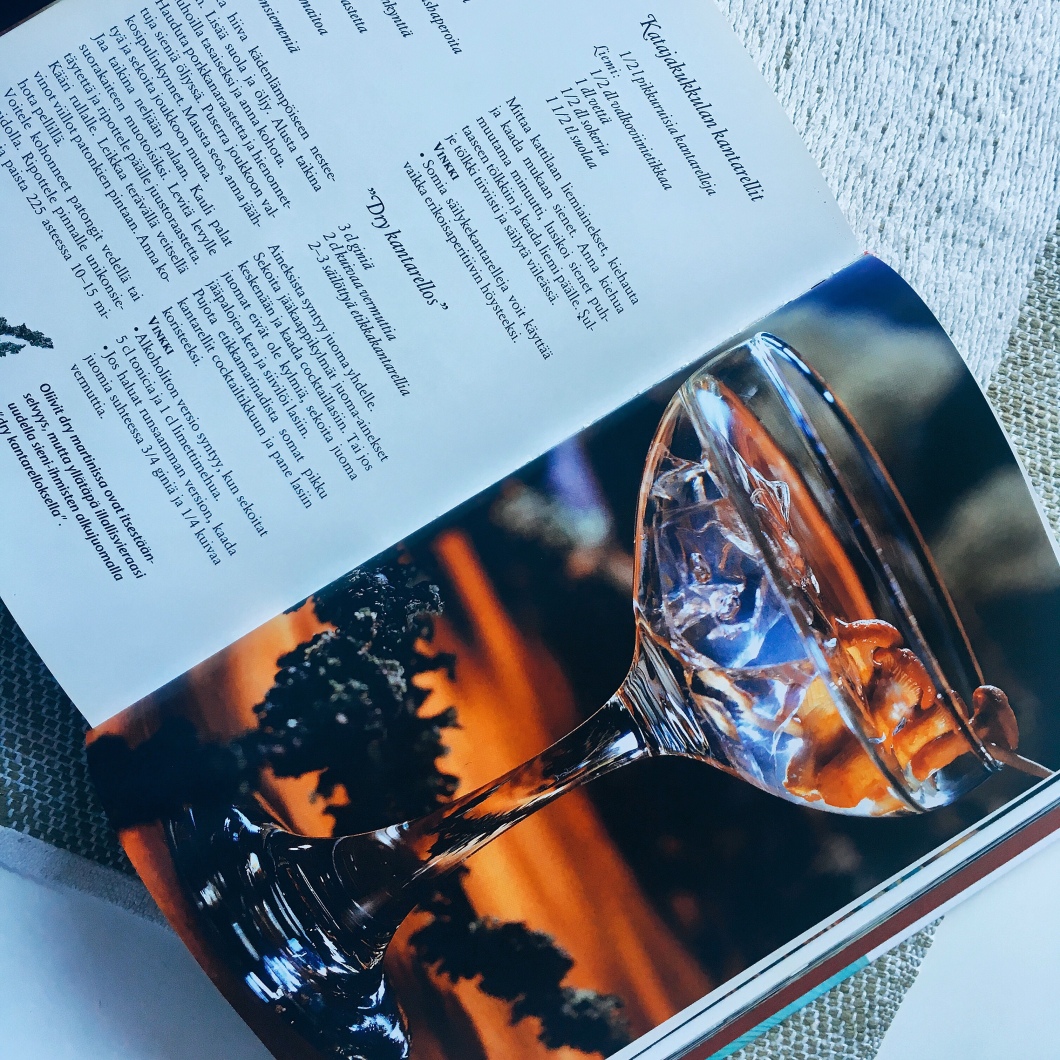 and if all else fails, this Finnish cookbook suggests putting chanterelles in gin and vermouth.

I will be posting some more detailed GF vegan recipes through the month, and the rest of the year too… if you want to know more about these then just drop me a message, and I will see what I can remember! I think my resolution for this year has to be to make better friends with my scales and to write things down… my brain is much too small to remember actual measurements! 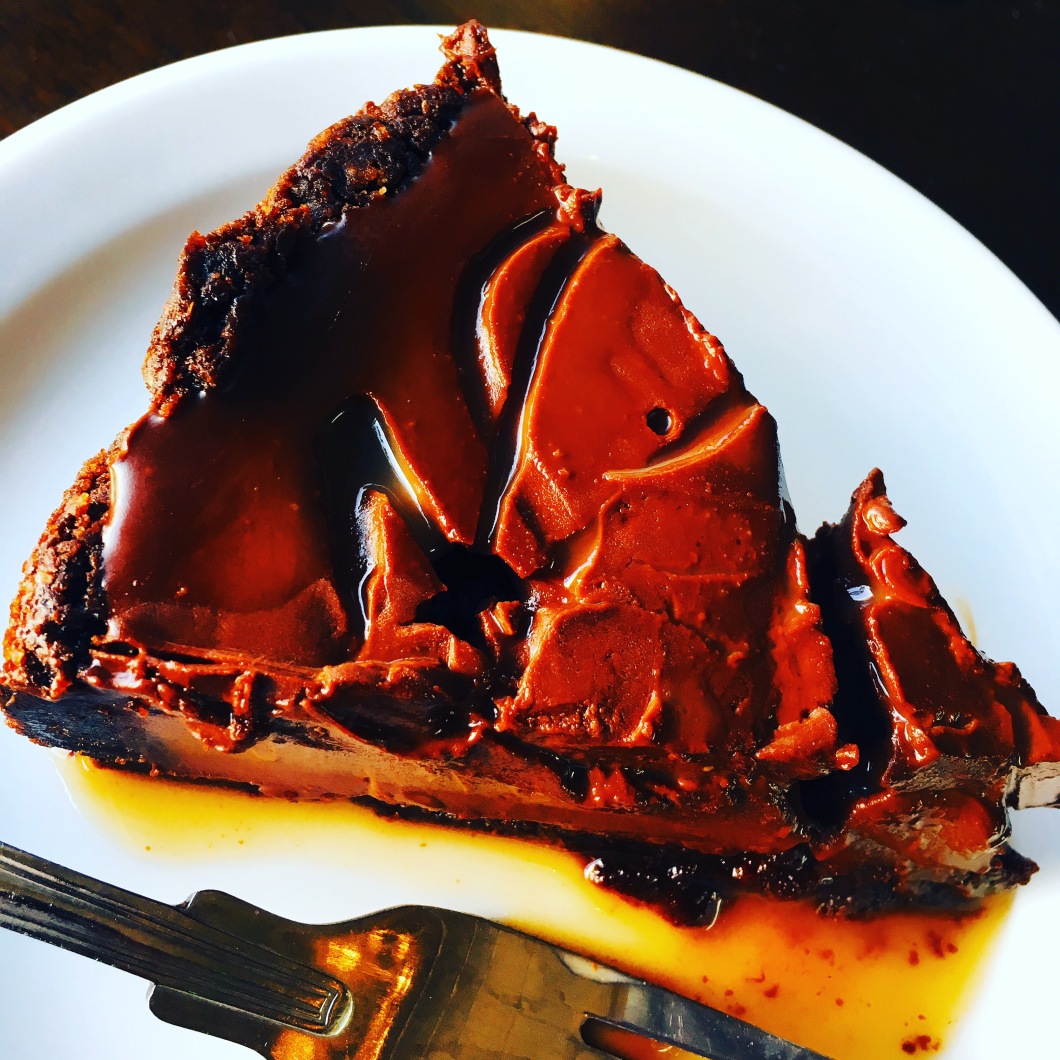 Just a casual reminder that THIS is vegan too…