Honest Burgers Camden… Getting The Meat And Potatoes Right

Anyone who follows this probably knows that I seldom eat meat, I can’t remember the last time I had a beef burger, probably about five years ago! Recently I’ve been feeling quite run down and anaemic after a low level glutening, and started craving a burger like crazy. I’m not sure a few drinks with some visiting Finns in The World’s End really helped matters but I decided this would be as good a time as any to give Honest Burgers a go.

I had been drooling over the Insta omnipotence of their fried cheese stuffed, sadly departed special but thought hell, a decent burger with a bun that doesn’t magically transform to bird food as soon as you try to bite into it… I’m there!

We walked along an eerily quiet Camden drag, and noted how many of the old Independent shops had been replaced by dull chain places, a few friends who had been running their businesses out of Camden market got their marching orders recently and the face of the place is definitely changing. It sucks that Camden is becoming another identikit high street and losing the character that made it cool, but then at the same time it kinda ceased to have any real magic a little while ago, the vintage shops moved online, the old punks died and Topshop and Primark started flogging every band tshirt under the sun. Most of my recent Camden nights have been to hang out with visiting friends, and in a way it seems to have become a place for tourists as more of the old haunts have closed down or been “tidied up” and the old faces have drifted on.

The scaffolding clad building that houses Honest, just another reminder of this state of flux, renovation, gentrification, whatever. Inside however Honest was very much open, and we received a warm welcome from a friendly host who was fully clued up on the allergens on the menu, I also later found out that one of the chefs is a fellow gluten dodger too… in other words, beyond their reputation I felt in very safe hands! 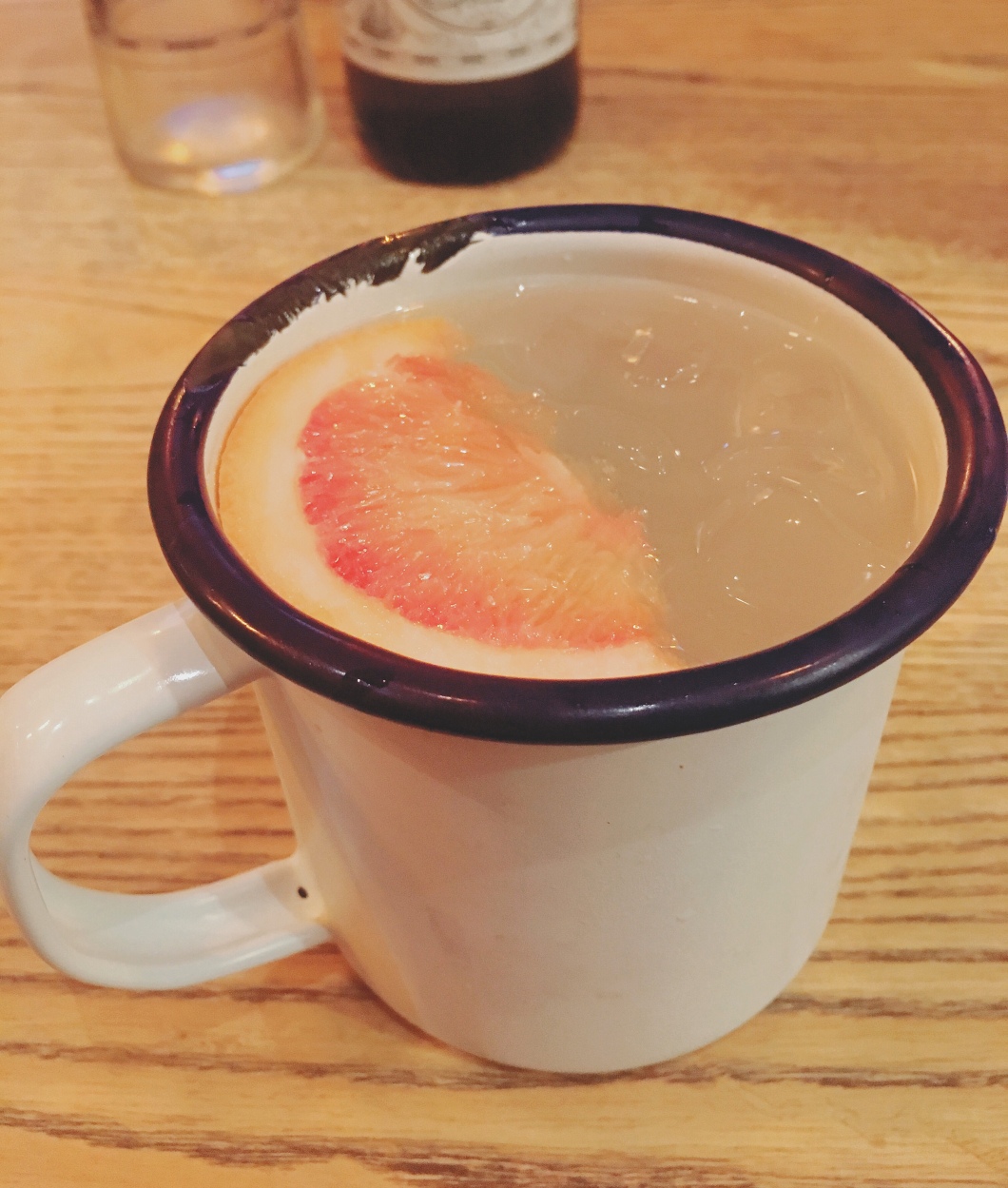 I kicked the meal off with a Paloma, I love a bit of grapefruit in a drink and I’m getting more and more into tequila and mezcal, there are growing numbers of really good quality offerings on the market here in the U.K. The Pet Finn had an off limits Frontier lager which he really liked.

Checking the menu, the Pet Finn who is largely a veggie but had also been craving meat went for the Chili Burger, since it was a treat he also had a regular gluteny bun so I couldn’t steal a bite, but reported back that it was good, a nice level of spicy, throwing chilli cheese, jalapeño relish and hot sauce into the mix, along with burger stuffing staples like red onions, bacon and lettuce and was certainly big enough to satisfy any meat cravings for quite some time. 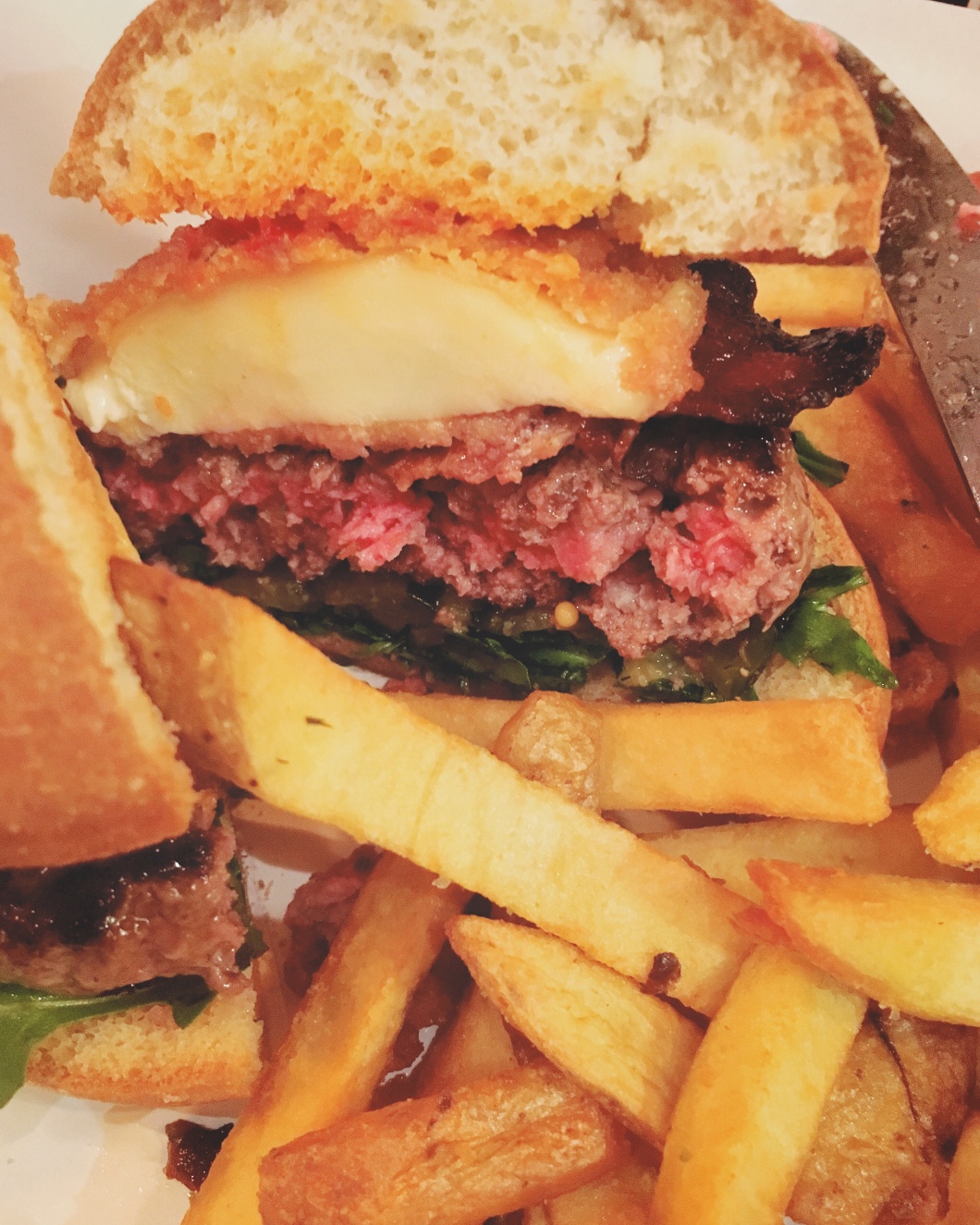 And me… I got lucky, you see the Honest x The Cheese Truck special that I’ve been Insta envying lives on only in Honest’s tiny Camden Market outpost as their local special, the imaginatively titled Camden. A perfectly cooked burger, topped with both fried mozzarella and Old Winchester, crispy salty bacon, and plentiful pickles with a really good fresh hit of dill (yes, my dill obsession again), my only gripe was I would have liked a bit more chipotle jam. And the bun, let’s just take a moment to appreciate the wonders of their gluten free buns, yes, it is smaller than their normal one, but to be honest I’m happy with a better burger to bread ratio! And I could cut it in half!! Without it crumbling!!! When that happened I knew it was going to live up to the hype.

We both loved the rosemary fries, which I often miss out on because of shared fryer woes, but realised our rookie error of bypassing the onion rings when a neighbouring table got brought their order. That said we were totally stuffed, and I think we would have fallen asleep on the tube and ended up in High Barnet if we had eaten more, so I will have to save that treat for another visit! I rounded off my meal with a Botanic Garden Cocktail, a nice variant on the gin-elderflower-apple-lime line of cocktail recipes, as The Pet Finn struggled on valiantly through his huge regular burger bun.

I will definitely have to go back, if only for those onion rings, and they do have a fritter-based veggie burger which sounds worthy of a try, as well as a bottomless brunch deal which has got my attention and would be a great place to take visiting friends, which also includes the refreshing Botanic Garden cocktail. 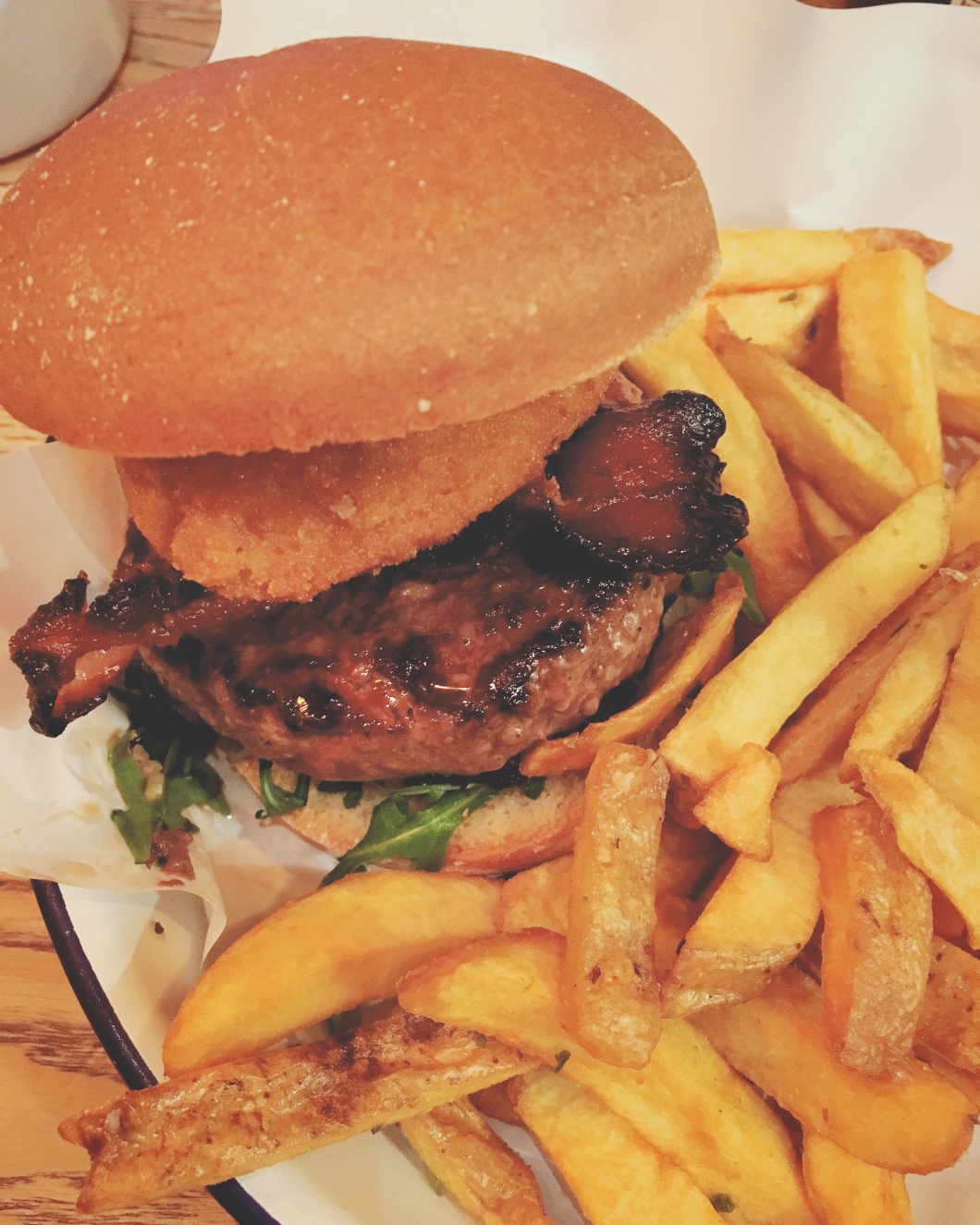 In reality though they are all about meat and potatoes, they set it out in a little manifesto style booklet which they put out on the tables, backstory, provenance, the works. The Pet Finn was in two minds as to whether it was a bit too marketing ham, but then he works as a designer / art director so I can’t take him anywhere, that said he thought the “hamburger” menu on their site being a cute little burger rather than the usual 3 lines was a cool design touch. Anyway I digress, the meat and potatoes, as well as everything else we ate and drank were spot on.

And I know I had my little rant about Camden losing its character but it is good to be able to get food that isn’t a botulism burger, some 3 day old reheated pizza or a kebab of unknown origin. I mean I have witnessed and sometimes been drunk enough to eat some seriously ropey food in Camden over the years. So maybe all change isn’t so bad, on top of good burgers, the staff were friendly and super aware of allergies and gluten, the music was pretty decent, and we sat on a table next to a pair of old punks, so it seems there are still some left in Camden! We got chatting to them and they invited us to join them for a pint in the Elephant’s Head but by the time we left we were dangerously close to slipping into a food coma so thought it best to get home meat (and potato) cravings fully satisfied!